Are BJP-NCP coming together to form government in Maharashtra? 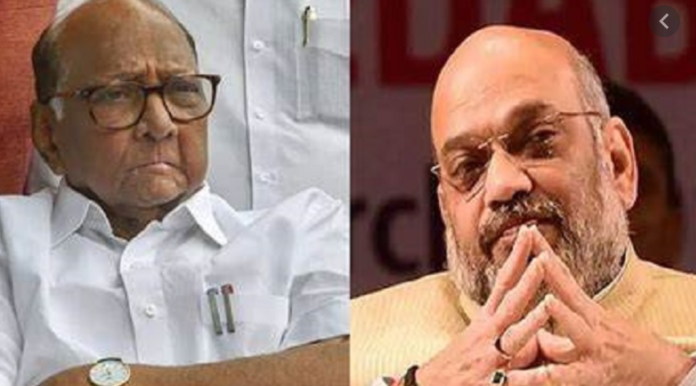 Are Bharatiya Janata Party (BJP) and National Congress Party (NCP) coming together to form a government in Maharashtra?

The speculation has grown rife after reports suggested that Union home minister Amit Shah and NCP boss Sharad Pawar, along with its another leader Praful Patel, met at Gautam Adani’s residence in Ahmedabad on Saturday.

‘Everything can’t be made public’ says HM Shah.

Listen in to HM Shah & a reaction from Maha HM Anil Deshmukh.

The Maha Vikas Agadhi government is in doldrums after the VazeGate scandal which are too well to be repeated here.

In the 288-seat assembly, BJP has 105 seats and NCP 54 and together they easily make up a majority.

Shiv Sena has 56 and Congress 44 seats in the assembly.

Though both the parties have not commented on the said meeting, Amit Shah did admit that a meeting took place between the leadership of the two parties and added that everything could not be made public.

On Sunday, during a press conference addressed by Amit Shah, a reporter from Tims Now asked the BJP leader about the said meeting with Sharad Pawar.

In reply, Amit Shah said: “Everything can’t be made public.”

Casting aspersions at Deshmukh’s knowledge of Vaze’s actions, it also commented, “It is a matter of real investigation to find out how an API (Sachin Vaze) had so many unlimited powers and access at the police commissionerate and the home minister was not aware of it”. Maharashtra government has ordered a probe by a retired High Court judge into Param Bir Singh’s allegations against him. Inspite of multiple calls by BJP and Congress, NCP has stayed firm saying ‘Deshmukh need not resign’