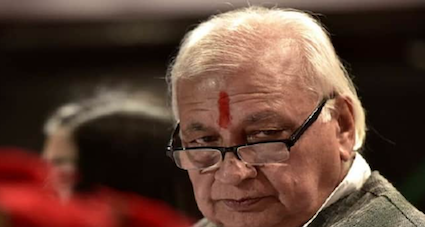 The inimitable Arif Mohammad Khan, Governor of Kerala, and a secular Muslim like few, wondered in an interview to Asianet News, why the implementation of Uniform Civil Code across India ought to be an issue at all.

Uniform Civil Code is in force in many a countries where Muslims reside. “Was their faith endangered because of that? NO. Then how will that happen in India,” said Khan.

Khan, who is known to speak sense when people get swayed by emotions, said: “The Uniform Civil Code is not meant to take anybody’s identity. It cannot become an instrument of creating unity. We have uniform criminal laws. We have uniform commercial laws. Every law I common. And if you come to civil code, even the Indian civil code is common.”

Khan said Uniform Civil Code concerns only “marriage, succession, inheritance and divorce.” It’s to create uniform or similar rights and obligations which arise from marriage. It has nothing to do with customs or rituals of any community.

As for him, the controversy around UCC is “manufactured.”

Khan didn’t hold himself back on the ongoing Hijab Row in Karnataka as well which has snowballed into a national controversy.

As for him, it’s a needless controversy. In his view, the “conspirators” were targetting the Muslim girls who represent the new generation of Indian students doing exceptionally well in schools, colleges, universities.

“There is a small section of people, which earlier wanted to see triple talaq continue. When this section saw Muslim girls doing well in colleges and universities… I do not know if you read Urdu newspapers, but questions are being raised with regard to their mannerisms that are viewed as a threat to the religion,” the Kerala Governor said.

He added, “Through the Hijab controversy, this section wants to ensure that girls do not get education in colleges and universities. And even if they do study after wearing hijab, their career prospects are impacted negatively and they will be confined to homes.”

Calling upon people to put an end to such needless controversy, the Governor said that children must be told to focus on their education.

“There is only one way to improve the situation of the community and that of the country is through good education and using your potential for the service of the nation,” he said.

Khan said Hijab was misinterpreted to mistreat women in the Muslim community as the holy Quran doesn’t use it in the context of dress of women.

“Hijab is a term that has been used in the Quran in seven verses or on seven occasions. The burqa is also a dress. Muslim law started taking a definite shape — they used hijab for all kinds of dresses which are associated with women. and the truth is the Quran does not use it in the context of the dress of women,” explained Khan.

“In those times, almost every society was divided between two sections. One was free men and free women, and the other was slave men and slave women. If you study most of the economies of those times, they were slave-driven. The ‘Khimar’ was then required to be drawn over the ‘Jilbab’ (long robe), which means cover your bosoms. Today, the world over, slavery does not exist. United Nations declaration of human rights is there. We have our own fundamental rights. Every person, be it a woman or a man, they are all free today. The context has disappeared.”

The “saffronisation of India” has been whipped into hysteria by Left-Liberals But Khan said the saffron colour has no “religious overtone.” Instead, in his view as an Indian citizen, saffron represented renunciation and sacrifice.

“We are strange people, we say we have this Tricolour – saffron part is Hindu, the white part is others, and the green part is Muslims without knowing anything about it. Saffron in Indian colour means renunciation, it means spirit of sacrifice, it means living for others, not for yourself. The White denotes peace, green does not denote Muslims, green denotes prosperity,” the Governor said.