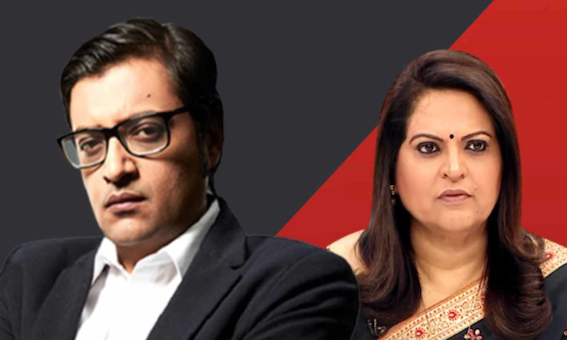 Arnab Goswami, anchor and owner of Republic TV network, has filed a defamation case against Navika Kumar, anchor with Times Now channel. Besides, Goswami has served a legal notice to Indian Express.

The defamation complaint, as per a report, was filed before the chief metropolitan magistrate, Patiala House court in Delhi.

Navika, allegedly, had made false claims relating to Arnab Gowami’s WhatsApp chats which have been leaked. Apparently, Kumar accused Goswami of building its success on TRP manipulation.

The plea alleged that Navika Kumar was jealous of the complainant.

The petition says that Navika Kumar had falsely claimed that Republic TV had access to unauthorized official secrets to the Balakot airstrikes before the strikes took place.

In its notice, Republic TV had accused Indian Express of carrying out malafide, vicious and vexatious campaign to tarnish the reputation of its Editor-in-Chief, Arnab Goswami.

“Despite the pendency of the matter before a court of law, which is well known to you, the above news report has attributed guilt to our client in relation to the alleged TRP scam. The news report has sought to impute guilt on our client without paying any heed to the true facts and to the indeterminacy of the issues and pending court action by our client before the Hon’ble Bombay High Court”, read the notice.

The plea has accused Indian Express of manipulating ithe  readers with ‘squarely deliberate and mischievous’ headlines.

Republic TV has demanded Indian Express for an unconditional apology and a proposal on monetary compensation for the news report.