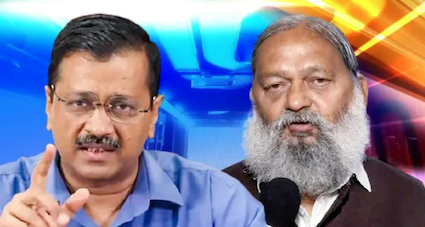 Delhi Jal Board (DJB) vice-chairman Raghav Chadha, the perennial cry-baby, accused the Haryana government of withholding the national capital’s share of 120 million gallons of water a day on Sunday.  He said that the water utility has moved the Supreme Court, seeking directions to Haryana to release the capital’s legitimate share of water.

However, Haryana’s Home Minister Anil Vij launched a scathing attack on  Delhi Chief Minister Arvind Kejriwal and his Aam Aadmi Party (AAP) by saying that “the AAP chief has done PhD in lying”.

Vij alleged that Kejriwal had kept surplus oxygen and lied about it even during the COVID period and is once again making false allegations against Haryana regarding water distribution.

During a pressing conference, Vij said, “He showed fake data to get excessive medical O2 and now he’s falsely accusing us to hide his failure of not being able to provide water to Delhiites. It’s his right to approach court, we’ll reply in court.”

He further revealed that considering the delay in monsoon, their state is also facing water shortage, but Haryana is giving extra water to Delhi than its due share. He said, “Even if there is water shortage, Haryana is managing itself.”

“Haryana is continuously supplying 1049 cusecs of water to Delhi through Munak Canal and the Chief Minister of Delhi is making baseless allegations against Haryana by misleading the people of Delhi to hide the internal malpractices and failures of his government,” he added.