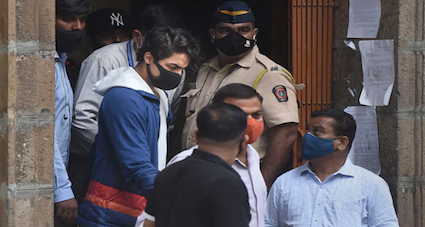 Aryan Khan has been granted bail after more than three weeks in jail, by the Bombay High Court.

The 23-year-old son of Shah Rukh Khan has been in custody since October 3, hours after raids on a cruise ship party by the Narcotics Control Bureau (NCB).

Aryan Khan, who has been in Mumbai’s Arthur Road jail since October 8, had been denied bail twice before.

His lawyers had repeatedly pointed out that no drugs had been found on him.

The NCB, however, argued that he was part of a conspiracy and that his WhatsApp chats revealed his involvement in illicit drug dealings.

The Narcotics Control Bureau (NCB) has opposed the bail plea filed by actor Shah Rukh Khan’s son Aryan Khan, who was arrested in the case earlier this month. The NCB alleged that Aryan Khan not only consumed drugs, but was also involved in illicit drug trafficking.

Additional solicitor general Anil Singh arguing before the Bombay high court for NCB, said a peddler, Aachit Kumar, was arrested based on the star-son’s statement.

“There was mention of bulk drugs. Considering that, the offence is non-bailable,” Singh said, adding all the offences in the case are non-bailable under the Narcotic Drugs and Psychotropic Substances (NDPS) Act.

He said that if a person might have not committed a crime but attempted it, that itself is a crime.

“My contention is that applicant having dealt with or even if attempts to deal with, then section 28 squarely applies and if he’s is a part of conspiracy, then section 29 applies. So, the person who is not actually found in possession of drug but there was an attempt to deal with commercial quantity, is a part of conspiracy which relates commercial quantity,” Singh said.

The ASG further contended that drugs were seized from Arbaaz Merchant, (another accused and his friend) at the docks, and they were meant for consumption by both Aryan and him.

He said the chats revealed there was an attempt to deal in drugs on commercial quantity. “From the eight persons arrested at the terminal, we have seized commercial quantity. The cruise trip was just for two days. It is a case of conspiracy. It cannot be a coincidence they gathered with multiple drugs,” he added.

Anil Sigh also takes a sly dig at Aryan, mentioning that earlier they maintained that nothing has been recovered from Aryan but later added it was in just small quantity.

When Aryan’s lawyer Amit Desai, calling it all a trap, argued that the NCB didn’t conduct any blood test on Aryan and therefore, no claims of consumption of drugs can be established on his part, Singh explicitly mentioned that the question of medical test does not even arrive as they are arrested for possessing and not consuming drugs.

“They are saying we haven’t tested for consumption. Where is the question of testing when they haven’t consumed it? They were found in possession. If two people are travelling together, and the first person knows the drug is with the other and it is for their consumption…Though the person may not be in actual physical possession, he may be in ‘conscious possession’” Singh argued.