As men’s hockey team lifts bronze, a surprise call lifts them up: Watch 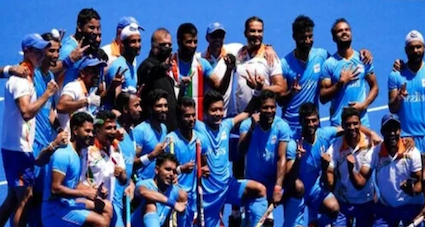 After a wait of 41 years, India has an Olympic hockey medal as its men’s team defeated Germany 5-4 in a thriller here on Thursday.

The captain and the coach of Indian hockey team had a surprise congratulatory call from none else than prime minister Narendra Modi as tweeted by Sports Authority of India Media.

Germany took an early lead with a goal in its very first attack. A reverse hit from Herzbruch was saved by India’s goalkeeper PR Sreejesh; but Timur Oruz converted the rebound to give the team a lead.

Germany kept a wave of attack at the Indian citadel but Sreejesh was like a wall and once made a great save from his left hand off a deflection from a German stick.

In the second quarter, India equalised through Simranjeet. He found a pass from Nilakanta who had intercepted one from Hardik Singh. He turned and struck a tomahawk shot into the nets.

Germany responded immediately by ramming its second goal as Ruhrer found a way to send the ball inside the circle for Wellen to close out a goal.  Germany increased its lead through Furk.

In the second quarter, India managed to find the equaliser courtesy of Simranjeeet. India started a counterattack with Hardik Singh intercepting the ball and passing it to Nilakanta, who took his time but found Simran at the center of the circle. He turned and struck a tomahawk shot into the nets. The German team however was immediate with its response by scoring the second goal as Ruhrer managed to find a way to send the ball inside the circle for Wellen to apply the finishing touch and give his team the lead. India’s poor defending led to Germany doubling their lead through Furk after Surender Kumar lost possession inside the circle after being double teamed by German players.

India made it 2-3 when Hardik Singh scored the second goal after Harmanpreet’s drag flick was saved by the German goalkeeper. The score equalised before the second quarter ended as Harmanpreet drag flicked from a penalty corner into the German net.

The third quarter began with India taking the lead for the first time in the match.. It was Rupinderpal Singh who converted a penalty stroke. Mandeep Singh was tripped inside the circle with Germany asking for a referral. The decision though went in India’s favour.

India further increased the lead to 5-3 with Simranjeet Singh scoring his second goal of the match following an assist from Gurjant Singh who had dribbled past German defence before providing the pass. Germany kept pounding the Indian defence with a series of penalty corner and circle penetration but failed to find the goal.

In the fourth and final quarter, Germany scored their fourth goal through a penalty corner. Windfederto made it 4-5 for his team. Thereafter India continued to hold its nerves against an attacking German side. During the dying minutes, the German team pulled up their goalkeeper to bring in an extra man on the field, however, the Indian team held on to win the bronze.

This is India’s fourth medal in the Tokyo Olympics following the success of Mirabai Chanu (silver), PV Sindhu (bronze) and Lovlina Borgohain (bronze).

India last won a medal in the Moscow Olympics in 1980 which was a gold and facilitated by boycott of Western countries.