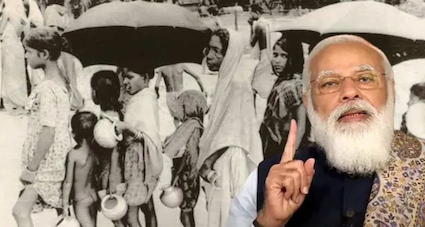 As Indians, we are just days away from marking the 75th Independence Day, and it will be grand culmination of a year of `Azadi ka Amrit Mahotsav’ celebrations. Confident of our future, an upbeat mood pervades all corners of the nation. Despite minor irritants, some problems here and there.

On the other hand, our western neighbour, Pakistan, which was 75 years ago, is amid a major economic crisis, waiting eagerly for International Monetary Fund (IMF) tranche of $1.7 billion. To keep going, to keep afloat and not falter on its international repayment (of debts) schedules. It also expects friendly countries like Saudi Arabia and United Arab Emirates (UAE) to give it another $4 billion. It needs a lifeline of $5.7 billion desperately or it can sink.

On July 8, 2022, foreign exchange reserves of India stood at over $580 billion, enough for over nine months of imports projected for the financial year 2022-23. Around the same time, foreign exchange reserves of Pakistan stood at $8.75 billion, enough to service barely a little over a month’s imports. Still, most Pakistani politicians have an attitude and believe that their nation is too big, nuclear armed and it could be way too dangerous for the international community to let them fail! It just shows how skewed their thinking is and desperate the nation is at this juncture. Blame it on everyone but Pakistanis!

It also shows how rent seeking ways have brought Pakistan to economic ruin, now that the US has stopped bankrolling them. In just a year of the US becoming tight fisted, Pakistan is dangerously close to defaulting on its debts. Its leaders often assert that their country is not on the verge of a situation like that of Sri Lanka. But these statements seem increasingly like empty words bereft of any substance.

Even if Pakistan gets $1.7 billion from IMF and $4 billion from UAE and Saudi Arabia, how long is that money going to last? How long will that allow it to keep its head above the swirling waters of mounting debts, international isolation and despondency? My guess, or your guess, on this is as good as that of Pakistani Prime Minister Shehbaz Sharif, ex PM Imran Khan or Pak Army chief Bajwa. Why? None of us, nor these Pakistani men, actually know the answer to that question.

What about Pakistan’s most trusted friend China? Well, China has given lots of money to Pakistan, it can be said, but all this money has come in the form of commercial loans. By July 2020, China had invested over $60 billion in China Pakistan Economic Corridor (CPEC), touted as one stop shop for bringing economic prosperity to Pakistan. What it has done, instead, is brought massive debts to it which Pakistan can’t service easily.

The Chinese investments were not freebies like the unlimited dollars which flowed for decades from the US as outright grants. Or rents extracted by Pakistan from the US for keeping a toehold in Afghanistan, which led to the coinage of an internationally known term, the Af-Pak region. It is now a go-slow time for China to wait and watch Pakistan closely to see whether it sinks or stays afloat. Of late, China has not been pressing Pakistan to repay its loans, mainly because it wants latter to maintain a belligerent posture on its borders with India. From that, China stands to gain enormously, vis a vis India.

It is amusing to come across write-ups in leading Pak dailies like The Dawn, The International News and The Express Tribune critical of the power elites of their country. Sometimes, one does come across something which dissects the goings-on in Pakistan and blames it on religious rabid indoctrination started in the country in Zia ul Haq era. They either forget, or deliberately gloss over the fact that Pakistan got divided into two many years before those years in 1971 on the question of ethnicity. Within first 25 years of being carved out on the basis of Two Nation Theory, Pakistan had found to its chagrin (and actual division) that ethnicity could easily trump religion. So was born Bangladesh.

Has destruction of democratic values and not adhering to them helped Pakistan? No. The refusal of honour the verdict of 1970 elections was the basic reason why Awami League sought separation of Eastern Pakistan from West Pakistan. The denial of power to Sheikh Mujib Rehman who had won a clear majority was what led to the creation of Bangladesh.

Today again, 50 years later, Balochistan, Khyber Pakhtunkhwa and Sindh are simmering with discontent as Punjabis dominate all spheres of life in Pakistan. For decades, successive Pakistani governments fed extremist elements against India in what they termed as their national aims. These extremist elements like Jaish e Mohammad (JeM), Lashkar e Taiba (LeT), Tehrik Taliban Pakistan (TTP) and others have turned against their mentors and treat them as prime enemies now.

Many political parties are now jockeying for power and their salient selling point is promise of adherence to a more rabid, rigid and intolerant sharia if they win! That best defines the average mindset in Pakistan and rationale people are increasingly getting marginalised there.

On Wednesday, Pakistan Foreign Office, called FO (what else?), issued a statement against India for marking August 14 as a day of remembrance about horrors of Partition. To mark this day, top educational institutes of India have already started organising seminars, interactive programmes and other activities. Essentially, India is doing a sort for tit for tat to Pakistan at one level. How?

Well, on August 5, Pakistan organised Youm e Istehsal (Exploitation Day), the third since 2020. This is to highlight the alleged atrocities being done in Jammu & Kashmir state whose special status was revoked on August 5, 2019. After watching top politicians of Pakistan like its President Arif Lavi, former PM Imran Khan and others make noises about August 5, India marking August 14 as Partition horrors day is to pay it back in the same coin.