Azad, Tewari not “star campaigners” for Congress in Punjab 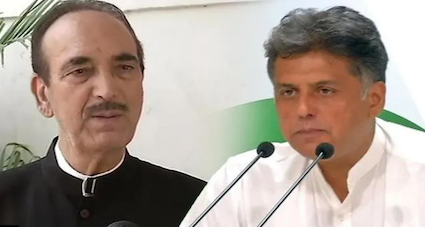 The “bad boys” of Congress, Ghulam Nabi Azad and Manish Tewari, have been dropped from the list of star campaigners for party for the upcoming Punjab Elections.

Azad, as one remember, was bestowed with Padma Bhushan on Republic Day by the government of India and Tewari, lately, hasn’t minced his words either on the functioning of Sonia Gandhi-led Congress Party.

The two are part of G-23 who have been upset for a while now with their party.

Azad and Tewari have been, along with other “rebels”, seeking an overhaul of the Congress party. In August 2020, the letter had demanded elections and restructuring the party.

Manish Tewari chose to make a sarcastic tweet on his omission.

Tewari incidentally has been the Hindu face who won from the Anandpur Sahib seat. Sunil Jakhar, another Hindu face, has been sidelined for the post of chief minister despite having the support of 42 MLAs.

The Punjab polls to elect 117 members of the assembly would be held on February 20 with results due on March 10.