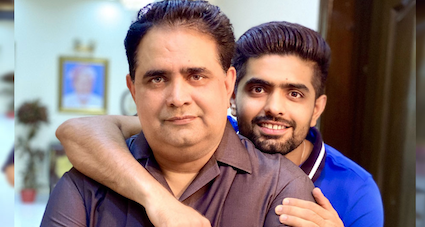 Pakistan opener batsman Babar Azam, along with Mohammad Rizwan, led their team to a historic 10-wicket win against India in the ongoing ICC T20 World Cup.

The win was historic because until now Pakistan had not won any match against India at any World Cup. Following this memorable victory, Azam’s father became visibly emotional. He fought back tears after his son guided the Pakistan team to their first-ever victory over India in an ICC World Cup.

This is Babar Azam’s father. So happy for him. I first met him in 2012 at Adnan Akmal’s walima. Babar at that time was 3 years away from Pakistan debut. I clearly remember what his father told me “bas debut ho jane do. Agay sara maidaan babar ka hai” pic.twitter.com/ZlsvODQkSg

Talking about the match Pakistan pacer Shaheen Shah Afridi’s incisive swing restricted India to a below-par total in the high-voltage clash at Dubai.

Chasing a 152-run target, Babar Azam and Mohammad Rizwan played spectacular knocks against India. They made a 152-run stand for the opening wicket to win the match by 10 wickets in just 17.5 overs.

Meanwhile, India will face New Zealand in their next encounter of ICC T20 World Cup 2021. The clash will take place on October 31.