Bakra-Eid: Maharashtra allows sacrifice of 300 water buffaloes by the faithfuls 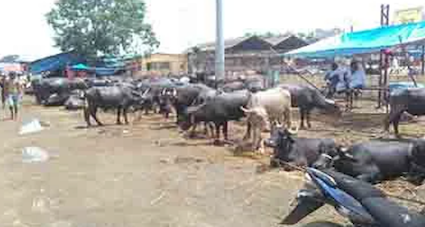 On the occasion of Bakra-Eid, All India Jamiatul Quresh and Al- Quraish Human Welfare Association filed a plea in High Court, demanding the slaughtering of 700 water buffaloes per day.

The plea was filed against the Brihanmumbai Municipal Corporation (BMC) order that allowed the sacrifice of 300 big animals — water buffaloes —per day at Deonar abattoir in Mumbai.

It is worthy to note that while the Bombay high court has rejected the plea to increase the number, it has also refused to interfere with the decision of BMC.

According to a report, AA Siddiqui, the advocate for the petitioner, claimed that as the pandemic was far from over, the authorities should increase the number of animals allowed to be sacrificed at Deonar abattoir to deter private individuals from carrying out the sacrifices unauthorised.