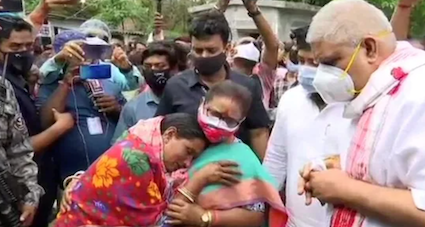 This happened after nearly 200 BJP workers returned to Mamata Banerjee’s Trinamool Congress party by tonsuring their heads and pouring “Gangajal” to purify themselves of the mistake of joining the saffron party. They pledged their allegiance to the TMC supremo on Tuesday.

“Many will recall the horrors of China’s Cultural Revolution in the mid-1960s: mass denunciations, self-criticism & other forms of public humiliation of people by Red Guards, and destruction of shrines. These scenes are now being re-enacted across W.Bengal against BJP workers,” said Dasgupta in a tweet.

Political violence erupted in West Bengal after TMC’s victory on May 2. Several appeals from the governor Jagdeep Dhankhar notwithstanding, the Trinamool Congress hasn’t got down to verifying the terrifying situation on the ground.

On Monday, the Calcutta High Court dismissed the Bengal government’s plea to recall a judgment by a five-judge bench that directed the National Human Rights Commission (NHRC) to examine all human rights violations in the state.

As per the report submitted by the SLSA member secretary, at least 3,243 persons were directly affected by the post-poll violence till June 10.

The Governor also termed the situation arising out of the post-poll violence in the state as “alarming and worrisome”.

Dhankhar, who embarked on a week-long visit to North Bengal earlier in the day, further said that this kind of violence has put a question mark on the democratic setup.