Bezos and Musk can live on Mars, funded on our money, and we all could go to hell! 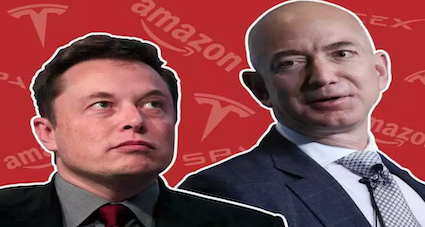 The space race in which billionaires like Richard Branson, Jeff Bezos, and Elon Musk are engaged has little to do with science. This is a media spectacle intended to distract us from the disasters that capitalism is causing on Earth.

On June 7, Jeff Bezos announced his intention to go to space on July 20, just a fortnight after he finished his tenure as CEO of Amazon. The announcement was touted as a bold new step in the multi-billionaire space race that has been escalating for several years, but it wasn’t long before its true face was revealed. Soon after that Jeff. Bezos had set a date, Virgin Galactic CEO Richard Branson, known for his bangs, decided to try and beat the richest man in the world in orbit and scheduled his own space flight for the 11th. July.

As these billionaires looked up to the stars and the media covered them with headlines, evidence of our planet’s climate rapidly changing in a direction hostile to life, human and otherwise, was mounting.

Towards the end of June, Jacobabad, a city of 200,000 people in Pakistan, experienced “wet bulb” conditions where high humidity and scorching temperatures combine to reach a level where the human body can no longer rest. cool. Meanwhile, halfway across the world on the west coast of North America, a heat dome made worse by climate change has raised temperatures so much that the town of Lytton, B.C. , reached 49.6 ° C, beating the previous temperature record in Canada by 4.6 ° C, before being reduced to ashes by a forest fire.

The contrast between these stories is striking. On the one hand, billionaires engage in a dick size comparison contest to see who gets out of the atmosphere first, while on the other, the billions of us who will never make a match. Such a journey must increasingly face the consequences of the effects of capitalism on the climate and the decades that its most powerful supporters have spent to stifle any action to combat them.

At a time when we should do everything in our power to keep the planet habitable, the billionaires offer us a spectacle to distract us from their permanent quest for capitalist accumulation and the disastrous effects that this has already engendered.

In recent years, as the billionaire’s space race has intensified, audiences have become familiar with their grand visions for our future. SpaceX’s Elon Musk wants us to colonize Mars and says his space company’s mission is to put in place the necessary infrastructure for that purpose. He wants humanity to become a “multiplanetary” species and says a Martian colony would be a back-up plan in the event the Earth becomes uninhabitable.

For his part, Jeff Bezos does not have much time for the colonization of Mars. Rather, he thinks we should build large structures in Earth orbit where the human population could reach a trillion people without further harming the environment of the planet. While we live our lives in the O’Neill Cylinders, as they are called, we will take occasional vacations on the surface to experience the wonders of the world we once called our home.

None of these futures are attractive if we look beyond the optimistic rhetoric of billionaires. Life on Mars would be appalling for at least hundreds of years and would likely kill a large chunk of those who made the trip, while the technology to create massive space colonies does not exist, nor will it be feasible. Before a long time. So what is the point of promoting these futures in the face of an unprecedented threat to our species here on Earth? It is about rallying the public to a new phase of capitalist accumulation, the benefits of which will be reaped by these billionaires.

SpaceX is not only becoming a key player in a privatized space industry, but also a vehicle for enabling military build-up through billions of dollars in government contracts. Big visions, rocket launches and shows of billionaires leaving the atmosphere are all covers for the true space economy.

If Richard Branson is using this publicity stunt to grab attention, the real competition is between Jeff Bezos and Elon Musk. While it is true that they do compete with each other, they have important interests in common. In 2004, Bezos and Musk met to discuss their respective visions of space, which led Musk to refer to Bezos’ ideas as “stupid.” As a result of this discussion, they bump into each other from time to time, exchanges that the media feast on, but they are still working to advance a private space industry from which they both stand to gain.

The years of competition between SpaceX and Blue Origin over NASA landing pads, patents and contracts show what the billionaire space race really is. The most recent example is a $ 2.9 billion NASA contract awarded to SpaceX to build a lunar lander, which Blue Origin and defense contractor Dynetics have contested. In the process, Congress considered increasing NASA’s budget by $10 billion, in part to be able to award a second contract to Blue Origin. This is not the only example of public funding for the ostensibly private space industry.

In a 2019 report, Space Angels estimated that $ 7.2 billion had been paid to the commercial space industry since 2000 and specifically named SpaceX as a company whose initial success depended on NASA contracts. Private space companies don’t just build relationships with the public space agency.

SpaceX won a $ 149 million contract from the Pentagon for the construction of missile tracking satellites, and two other contracts worth $ 160 million for the use of its Falcon 9 rockets. It also won a initial contract for $ 316 million to supply a launcher to the United States Space Force, a contract likely to be worth much more in the future, and she is building a rocket for the military that will deliver weapons to the world whole. To top it off, SpaceX has secured $ 900 million in grants from the Federal Communications Commission (FCC) to deliver rural broadband technology through its renowned Starlink satellites. to do.

Despite all the praise given to private space companies and the space billionaires who defend them, they remain heavily dependent on government money. This is the true face of the private space industry: billions of dollars in contracts from NASA, the military and, increasingly, telecommunications that help companies like SpaceX and Blue Origin control infrastructure. from space. All of this is justified to the public by the promise of big visions that are in fact nothing more than marketing ploys.

Part of the reason SpaceX has been successful in winning these contracts is because Musk is not an inventor but a marketer. He knows how to use public relations stunts to grab people’s attention, which in turn earns him lucrative contracts. He also knows what things not to highlight, like potentially controversial military contracts that aren’t tweeted or flashy announcement videos. Jeff Bezos’ journey into space is a spectacle, as he realizes that putting yourself forward is essential to grab the attention of the public and the bureaucrats who decide who gets public contracts.

For years, there have been fears that billionaires’ investments in space may be used to escape the climate chaos their class continues to fuel on Earth. This is the story of Neill Blomkamp’s movie Elysium : the rich live in a space colony and the rest of us suffer on a climate-ravaged Earth, while being pushed around by police robots as we do the work. which makes the abundance of the colony possible. But that’s not really the future we’re headed for.

As Sim Kern explains, to keep a few individuals alive on the International Space Station takes thousands of people and it gets harder and harder the further you move away from the only world that there is. ‘you can truly call home. Martian colonies or massive space stations are not about to emerge; they will not constitute a back-up plan or an escape route. As billionaires chase profit in space and strengthen their egos in the process, they are also planning the climate apocalypse here on Earth but they are planning only for themselves.

Just as Musk uses deceptive narratives about space to fuel public excitement, so does he with climate solutions. Its portfolio of electric cars, suburban solar installations and other transportation projects are on display to the public, but it is designed to work best, if not exclusively, for the elite. Billionaires don’t leave the planet, they isolate themselves from the general public with bulletproof vehicles, closed communities powered by batteries, and maybe even exclusive transport tunnels. They can afford to maintain multiple homes and have private jets on hold if they have to flee a natural disaster or public scandal.

We desperately need the public to see beyond the spectacle of the billionaire space race and recognize that they are not laying the groundwork for a fantastic future and even advancing scientific knowledge of the universe. . They are trying to prolong our struggling capitalist system, while diverting resources and attention from the most pressing challenge facing the overwhelming majority of the planet. Instead of letting billionaires keep playing in space, we need to grab the wealth they’ve taken from us and redeploy it to solve the climate crisis before it’s too late.

(This piece is taken with gratitude from newsnet.fr).