“Bhagwant Mann a rubber-stamp” as Kejri bypasses him in Punjab 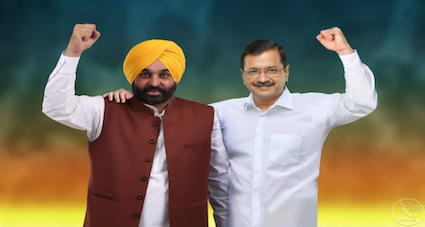 Arvind Kejriwal’s meeting with Punjab officers on Monday, reportedly in the absence of Chief Minister Bhagwant Mann, has fueled a massive controversy with the opposition Congress alleging “remote control” by the Aam Aadmi Party (AAP) chief weeks after the party’s victory in elections.

Arvind Kejriwal, the Chief Minister of Delhi, reportedly met with top officials of the Punjab State Power Corporation Limited (PSPCL) in the meeting, where the state’s Chief Secretary and Secretary, Power, were also present.

Opposition parties like the Congress and Akali Dal seized on reports that Bhagwant Mann, who took charge as Chief Minister last month after AAP’s win in Punjab, was not present at the meeting.

Former Chief Minister Amarinder Singh alleged that the “worst had happened” and that Arvind Kejriwal “has taken over Punjab” long before expected.

“Worst was feared, worst happened. Arvind Kejriwal has taken over Punjab much before it was expected to happen. That Bhagwant Mann is a rubber stamp was a foregone conclusion already, now Kejriwal has proved it right by chairing Punjab officers’ meeting in Delhi,” tweeted Mr Singh.

While Mr Kejriwal or top AAP leaders have yet to respond to the criticism, a party spokesperson justified the meeting and said the opposition “should support” constructive steps for Punjab.