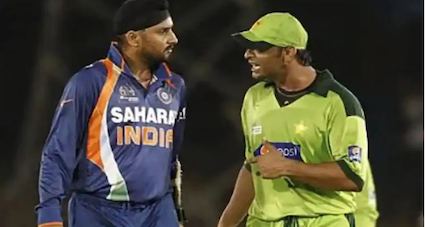 Ahead of the much anticipated T20 World Cup battle between arch-rivals India and Pakistan, which is set to commence on October 24 at the Dubai International Cricket Stadium, veteran Indian cricketer Harbhajan Singh poked fun at former Pakistan fast bowler Shoaib Akhtar.

It began with Akhtar posting a picture from the event and captioned it as: “With Mr. I know it all.@harbhajan_singh in Dubai for a pre discussion about the mother of all competitions.”

Harbhajan Singh, who is known for giving back to his opponents, took a sly dig at Akhtar and responded, “When you have 400 plus test wickets, I am sure you know more about cricket than someone with less than 200 wickets.”

Notably, Pakistan has never defeated India in the World Cups; whether it is a T20 World Cup or a 50-over World Cup, India has always remained victorious against neighbours in the mega event.