Bharat Bandh: Miscreants tried to mow down cop under tractor 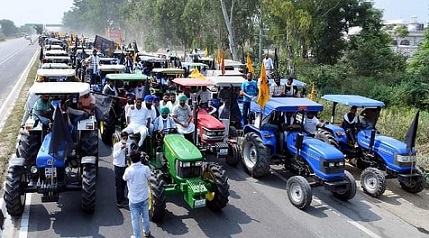 Six unidentified youth riding a tractor tried to run over police personnel in Titavi area of Muzaffarnagar on Tuesday, the day of “Bharat Bandh”. The video of the incident has now gone viral over social media and the police have registered a case against them. SP Abhishek Yadav said the police were trying to ascertain the identity of the youths and arrest them.

Incidentally, the government has rejected the demand of the protesting farmers to withdraw three farm laws passed in September. Bharat Ekta Ugrahan, claiming to represent farmers, observed “Human Rights day” at Tikri. It also demanded some people arrested in Elgar Parishad case as also those arrested in Delhi riots.

It may be mentioned here that a pro-Khalistani group Sikhs For Justice (SFJ), funded by Pakistan, had earlier declared a grant of $1 million for farmers in Punjab in lieu of their support for Khalistan. It has also been accused of being involved with some Chinese agents trying to undermine India.