Bharat Bandh turns out to be a big flop: Farmer leaders turning up to meet Shah, Kovind 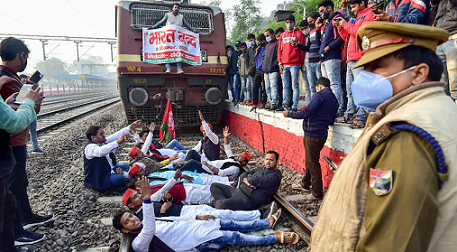 My day, all of it till 7 p.m on Tuesday, was to see how widespread was the support from the farmers’ community to the call of Bharat Bandh given by their brethren of Punjab and Haryana.

When the Opposition weighed in with their support a day before the Bandh, and openly stated they would show the Centre that the agitation was widespread and not restricted to two north-western states, the agenda of Bharat Bandh was clear: To show that new Farm Acts 2020 are hurtful to the entire farmers’ community of the land and the farmers of entire country are united against it.

Nothing of this sort happened. I have read that trains were cancelled in West Bengal, and so were shops and commercial establishments and shops in the state. There were images of people squatting on roads and protestors looking straight at camera on railway tracks, hands raised, watched by a bemused policeman. It’s such blatant a fake image that frankly I felt sorry how some are used as cattle in this bigger game. (see image).

Reports came in that farmers had blocked Delhi borders (which they were doing anyway at Ghazipur-Ghaziabad Delhi-UP border). Chandigarh highways were blocked.

But when I read that Sitaram Yechury is saying we didn’t want to join the protest lest it looks political; and the Bandh duration was reduced to a few hours, and that women folks squatting are returning home, and that Tamil Nadu chief minister came out in praise of Farm Acts 2020, there was only one conclusion to draw: Bharat Bandh was a flop show.

The day which began with the drama of detention of Akhilesh Yadav and Arvind Kejriwal’s party claiming their leader was under house arrest petered out into a damp squib.

Now the meeting between farmers and home minister Amit Shah is on, before the one due on tomorrow, and in between the farm leaders would meet President Ram Nath Kovind too. It sure sounds like running from pillar to post but some “farmer leaders” are still posing as Hercules, and giving an ultimatum to the Centre: It’s Yes or No and nothing in between.

Meanwhile we would suffer this farce as long as it lasts. I am already yawning.