Bhim Army workers posed as ‘relatives’ to stay with Hathras family; cause violence 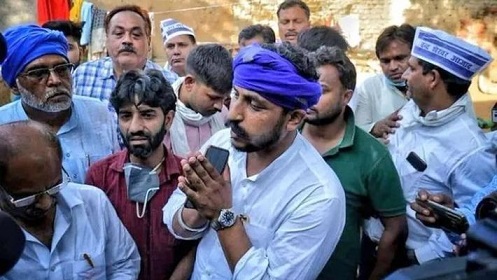 Three members of the Bhim Army, posed as “relatives” of the Hathras victim, and stayed with its family, it has been reported.

As per this report, after the victim died on September 29, and the police took the victim’s body to her village at the night, three Bhim Army workers slipped into the family’s house and stayed put there as “relatives.” One of them was a young woman from Jabalpur, Madhya Pradesh.

As per the report, the woman in particular was stage-managing media with provocative statements. The “relatives” first aroused police suspicion when decided to provide protection to the victim’s family. It required deploying personnel to protect each family member individually. That’s how the questioning began and that’s when these three “relatives” slipped away quietly.

The woman had fled on Tuesday. A bike with a Madhya Pradesh registration number came to pick her away, as per the report.

The newspaper has quoted SP Hathras that the woman, when asked by the police, evaded an answer. The two men with her had quietly slipped away meanwhile.

It may be recalled that the victim’s father had earlier expressed his satisfaction over the investigation but changed his tune later in which he claimed he was being pressurised by the state administration. In this video, a person could be seen “tutoring” him. This video was later shared by Priyanka Gandhi Vadra who claimed the victim’s family was being put under pressure.

In lieu of the facts being unearthed now, there is a strong suspicion that the three Bhim Army workers  posing as “relatives” were actually there to crease caste-based tensions. The political parties were at hand to stoke the fire.

As is now known, the UP police have begun a crackdown on elements who were instigating caste-based violence. Chief minister Yogi Adityanath has recommended court-monitored CBI probe.

Initially the victim’s family too was for a CBI inquiry. But after the state government ordered it, the victim’s brother started saying they wanted an inquiry by judges.