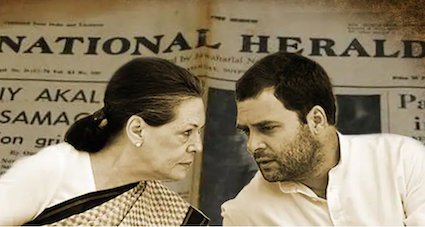 The National Herald scam case has been in news lately, more so because of Congress workers and leaders causing chaos around the country with their demonstrations. Notably, Sonia and Rahul Gandhi are accused and presently on bail on the case. Theve had been questioned by Enforcement Directorate in recent times.

Chandra Bhanu Gupta, the three-time UP chief minister and a senior Congress leader in the 1960-70s, had revealed in his memoir that National Herald was no better than a “Nehru-Indira mouthpiece” in the years following India’s independence.

Though the memoirs were written decades ago, it was published only last year by Naman Prakashan of Lucknow, four decades after Gupta’s death. The memoirs have gained relevance with ED raiding as many as 12 locations recently.

Herald House is the registered office address of Associate Journals Limited (AJL), the National Herald newspaper’s publisher, which is under probe over its acquisition by Young Indian, a firm linked to the Gandhi family. The newspaper came into being in 1938 by India’s first prime minister, Jawaharlal Nehru.

Chandra Bhanu Gupta, in his memoir, said if inquired about the funding of the National Herald, a big expose would unfold.

Gupta, wrote in his memoir Safar Kahin Ruka Nahin, Jhuka Nahin (Journey did not stop anywhere, did not bend), “I am surprised that National Herald is now considered as a property of the Nehru family. If there is some investigation by an inquiry commission into how funds were collected for National Herald, there will be a big expose. From the very beginning, the policy of the National Herald was to promote Nehru and his daughter. For it, freedom of the press meant attacking whoever criticised the wrong policies of the Nehru family.”

The book was published last year by Naman Prakashan in Lucknow, four decades after Gupta’s death.

Gupta recounted in the book how funds were collected for National Herald during its early years and thereafter when needed.

“We all- Acharya Narendra Dev, Shriprakash, Shiv Prasad Gupt, Purushottam Das Tandon and myself- sold shares. A hundred shares were bought in the name of Nehru so that he could be named its director. Some money was taken from Congress and a part came from money bags gifted to Nehru and other leaders. When I started collecting money for that, it was said that I wanted to take control of the paper. Still, I helped the newspaper during a crisis,” wrote the deceased Congress leader in his memoir.

The former UP CM stated that Rafi Ahmed Kidwai, the state revenue minister in both of GB Pant’s administrations until August 15, 1947, collected money from talukdar families and gave a portion of it to the National Herald. “As a result of that, Nehru never opposed Kidwai’s collection of the fund,” Gupta explained.

In his memoir, the Congress leader stated that on his 65th birthday, July 13, 1966, his well-wishers and friends gave him Rs 36 lakh. This was a year before the UP Assembly elections in 1967. Gupta said that his opponents in the state Congress (HN Bahuguna, Kamlapati Tripathi, and Govind Sahai) complained to the party’s central leadership in Delhi, and Kamaraj got furious with him. Gupta said that the National Herald’s then-managing editor, Uma Shankar Dikshit, a Congress supporter who went on to become a Union minister and the governor of Karnataka and West Bengal, told him that Indira Gandhi wanted a portion of the money to go to the National Herald paper.

But Gupta said he declined, pointing out that he had gotten an Income-Tax Department notification about paying tax on the Rs 36 lakh before Dikshit made this request. He asserted that he had done so.

Gupta claimed that since the newspaper had gradually transformed into a Nehru and Indira Gandhi mouthpiece, he “was not ready to fulfil the wishes of Indira Gandhi because she always helped my political opponents silently”. “I told her that I had no funds left,” he added.

The National Herald scam is one of the most notable legal cases in Indian history, as the Gandhis are directly accused. The Mother-Son duo of Congress President Sonia Gandhi and her son Rahul Gandhi, along with their aides – Oscar Fernandez, Motilal Vohra and Sam Pitroda are alleged to have been involved in massive ‘cheating and breach of trust’ in the acquisition of Associated Journals Ltd (AJL) by Young Indian Pvt Ltd (YIL). Assets worth crores of rupees had been allegedly transferred for purposes other than originally intended for a paltry sum. Sonia Gandhi and Rahul Gandhi got unconditional bail in December 2015.

(This piece is taken with gratitude from OpIndia)