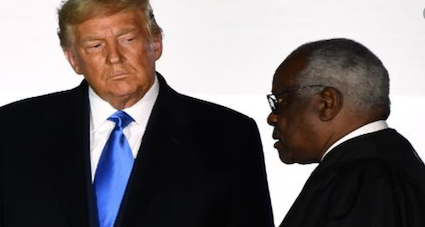 The United States Supreme Court associate justice Clarence Thomas, in a non-binding order, has written that the Big Tech censoring opinions, including the one of ex-president Donald Trump himself, impinges on Free Speech and Ist Amendment of the US constitution.

“If part of the problem is private, concentrated control over online content and platforms available to the public, then part of the solution may be found in doctrines that limit the right of a private company to exclude. Historically, at least two legal doctrines limited a company’s right to exclude.”

Justice Thomas also clarified that the Supreme Court believes regulations akin to those placed on “common carriers”, even for companies not historically considered so, maybe justified when, “a business, by circumstances and its nature, . . . rise[s] from private to be of public concern.”

According to Justice Thomas, there is a “clear historical precedent for regulating transportation and communications networks in a similar manner as traditional common carriers.” In the case of Telegraphs, they “resemble[d] railroad companies and other common carriers,” and were “bound to serve all customers alike, without discrimination,” wrote Justice Thomas.

“Once again, a doctrine, such as public accommodation, that reduces the power of a platform to unilaterally remove a government account might strengthen the argument that an account is truly government-controlled and creates a public forum.”, Justice Thomas added.

This order from Justice Thomas invites the U.S. Congress to ban social media companies from regulating or censoring their own content, and instead be transformed into “common carriers” or “places of public accommodation”.

There is a growing consensus that Big Tech’s control is an encroachment on Free Speech and the Ist Amendment and that it borders into outright censorship.