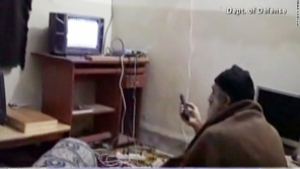 Record-keepers duly noted last month the fourth death anniversary of Osama bin Laden. On May 2, 2011, a brave and daring US Navy’s SEAL (Sea Air Land) team in a midnight operation entered a foreign country (Abbottabad in Pakistan) stealthily, broke into a large compound, and gunned down world’s most wanted terrorist.

Paul Craig Roberts, former Assistant Secretary of Treasury of United States, has only contempt for this version of truth.  “I can tell you for a fact that if SEAL’s had encountered bin Laden in Abbottabad, they would have used stun grenades and tear gas to take him alive. Bin Laden would have been paraded before the media, and a jubilant White House would have had a much-photographed celebration pinning medals on the SEALs who captured him.

“Instead, we have a murder without a body, which under law classifies as no murder, and a story that was changed several times by the White House itself within 48 hours of the alleged raid…”

This comes from the same federal government which had claimed Saddam Hussein had Weapons of Mass Destruction (WMD), that (Syria’s) Assad used chemical weapons, that Iran had a nuclear weapons program and that Russia invaded Ukraine.

Add these incriminating details: the sailors aboard the ship from which bin Laden was given a sea-burial report no such burial took place. The SEAL unit that is said to have supplied the men who killed bin Laden was mysteriously wiped out in a helicopter crash in Afghanistan. They had been flying into a combat zone in an antique, 1960s vintage helicopter!  Parents of the dead SEALs are asking for independent investigations. Now it is learnt that Washington has lost the bin Laden “death files.”

In a CBS 60 interview to Steve Kroft, apparently stage-managed, US President Barrack Obama (watch the video here) made some remarks which in closer inspection appear improbable.

Obama: “We didn’t have a photograph of bin Laden in that building. There was no direct evidence of his presence. And so the CIA continued to build the case meticulously over the course of several months.”

Kroft never asked how after months of surveillance in Abbottabad, the CIA could never take a photo of bin Laden, never recorded his voice. Did it mean that bin Laden, in all this period, never passed an open window? That he never spoke all these months? For with all the tech gadgetry at CIA’s command, it ought to have been a child’s play to make certain  bin Laden’s presence in the compound. Yet the greatest intelligence-gathering agency couldn’t find a trace of one man in one house over several months.

Still, White House would want you to believe that it had sent two helicopters of men to raid a place after several months of high-tech surveillance found no evidence of bin Laden. They apparently did so on the basis of a story about a bin Laden courier.

Obama insisted during the interview that the photo of a dead bin Laden, immediately circulated on internet before being squashed was indeed that of the deadly terrorist. Most evidence already points to bin Laden being already dead at the end of 2001.

David Ray Griffin, in his book “Osama bin Laden: Dead or Alive” concludes after examining the evidence made by everyone from CIA agent Robert Baer to Oliver North and relying on publicly available data that there is no evidence of bin Laden’s existence after 2001.  Griffin points out that the last time a bin Laden message was intercepted was December 2001. Since then, most messages purported to have come from him lack any supporting evidence.  Yet the hunt of bin Laden was the reason for the United States to attack Afghanistan and keep at it till now. And waste trillions of dollars and thousands of lives of its own men. Not to say to have wreaked untold damage.