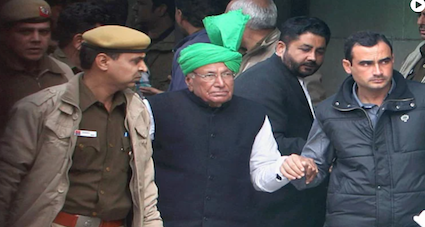 After INLD supremo Om Prakash Chautala was sentenced to 4 years of rigorous imprisonment in a disproportionate assets case, the Bharatiya Janata Party (BJP) has stated that such politicians, who have looted the nation for years should now give the money back, as there has been increasing political transparency in the last eight years in India.

Speaking to Republic Media Network, BJP leader Raman Malik said, “This is being done to a person who has already been through 10 years of imprisonment in another case. This also verifies that the Indian political system has to now own it up to change things, otherwise the people and the law of the land will not expect anything other than a clear political scope in this country. The political transparency that has come to India in the last eight years proves that people Lalu Prasad Yadav, OP Chautala and many others have to now change themselves and give back the country whatever they have looted.”

The grandfather of current Haryana Deputy CM Dushyant Chautala, a special CBI court had convicted Om Prakash Chautala in the disproportionate assets case on May 21. Special Judge Vikas Dhull also directed the 87-year-old politician who attended the court in a wheelchair to pay a fine of Rs.50 lakh and ordered the confiscation of 4 properties belonging to him. While the former Haryana CM sought 10 days’ time to file an appeal against the verdict, the court turned down this demand.

Speaking to the media on the judgment, his son and INLD secretary general Abhay Singh Chautala said, “We will challenge this verdict in the High Court. We are hopeful that we will get complete justice in the HC”. He added, “We will talk to our lawyers in two days and we might approach the High Court on Monday or Tuesday”. The present case in which OP Chautala was convicted dates back to 2005.