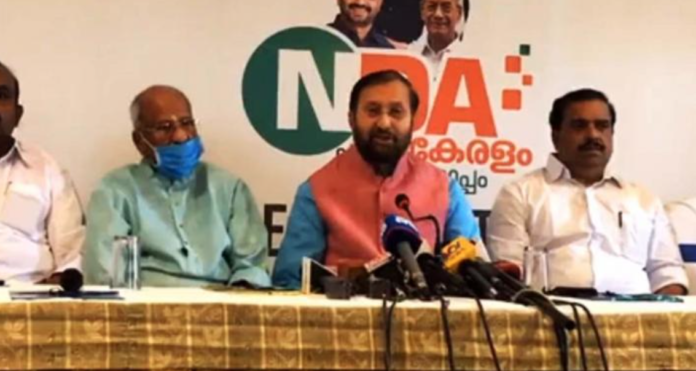 The Bharatiya Janata Party has released its election manifesto for Kerala assembly polls. While a social welfare pension hike, free laptops for high school, a job for every family, and gas cylinders for BPL households were some of the highlights of the manifesto, it was actually the two promises that stood out.

The party also promised legislation to protect “traditions” of the Sabarimala temple and end ‘love jihad’ or forcible religious conversions on the pretext of marriage in poll-bound Kerala.

Describing the manifesto as progressive, dynamic, aspirational, and developmental oriented, Javadekar said it guarantees a terrorism-free and hunger-free Kerala, among others.

It promised to put in place a system to prevent extremist activities “under the guise of religious and cultural educational institutions”. Steps will be taken to prevent youths from joining extremism and a “strong enlightenment drive” will be held, it said.

Also, according to the manifesto, the social welfare pension would be raised to Rs 3,500, and the temple administration will be freed from political control and entrusted to devotees.

Targeting his guns on the opposition, Javadekar explicitly questions the Left party and asked them to clarify their stand on the Sabarimala temple issue. He also accused the state’s CM Pinarayi Vijayan of ‘hijacking’ the schemes of the central government and implementing them with modifications in the state to take the credit.

“Pinarayi government has started hijacking central schemes by making little modifications and taking credit. We have given 80 crore people free ration for eight months which includes five kg dal and 40 kg rice to each family. “But the Kerala government wants to take credit., Mr. Pinarayi Vijayan, it’s not you but Modi, who has done all this,” he said.

The Union minister also said while Congress is fighting the Communists in Kerala, they are allies in West Bengal.

Kerala is set to elect a new assembly on April 6, 2021. The state assembly elections will be held in a single phase and the results will be declared on May 2.