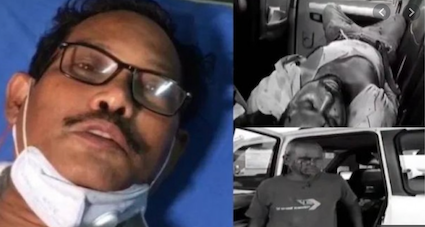 Bharatiya Janata Party (BJP) MP Jayanta Kumar Roy and his party workers were allegedly attacked with ‘bamboo and sticks’ by Trinamool workers in Jalpaiguri district of West Bengal. He was taken to North Bengal Medical College and Hospital in Siliguri for treatment.

He tweeted a video and wrote “Fascism at its peak in Bengal. Today @AITCofficial goons attacked me and our party workers at Rajganj. Savagery and lawlessness are the order of the day today in Bengal. @HMOIndia @PMOIndia @jdhankhar1 @narendramodi @AmitShah @BJP4Bengal @DilipGhoshBJP.”

He informed in his statement that he was attacked around 5 pm by TMC goons with bamboo sticks on my head and arms. “Few others who were with me were also attacked. There is no rule of law in West Bengal,” he added.

BJP MLA and Leader of Opposition Suvendu Adhikari also alleged that Roy and four other workers were attacked by TMC while arranging the return of BJP workers who left due to the post-poll violence in the state.

“Dr Jayanta Kumar Roy; M.P. Jalpaiguri was attacked by TMC goons along with 4 workers at Rajganj while arranging the return of BJP workers who fled due to political violence. The injured have been rushed to North Bengal Medical College & Hospital. I wish them a speedy recovery,” Adhikari tweeted.

This is the latest attack in the series of incidents of violence in the state after the election results. Last month, Union minister V Muraleedharan’s convoy was also attacked by TMC goons in Panchkhudi of West Midnapore