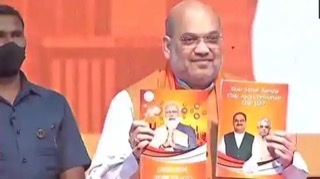 The Bharatiya Janata Party (BJP) has promised citizenship to all refugees in its election manifesto for West Bengal; and there are considerable gains for OBC and SC/ST which could deal a sucker-punch on ruling Trinamool Congress and its supremo, Mamata Banerjee in the forthcoming assembly elections.

No less lightning are the measures of 33% reservation for women in government jobs and implementation of 7th Pay Commission to all the government employees.

In the manifesto released today by Union home minister Amit Shah, during a programme at the Eastern Zonal Cultural Centre,  BJP has committed itself to Citizenship for all refugees, a move which could change the lives of millions of Hindus who migrated to West Bengal after the Partition but still have no legal status in the land of their ancestors.

Refugees is different from infiltrators who have crossed over from the neighbouring country Bangladesh (East Pakistan) but not out of religious persecution which has been the bane of generations of Bengali Hindus.

It’s the cornerstone, the line in the sand as it was, on which Mamata Banerjee had launched the anti-CAA protests against it last year.

Further, the refugees would be blessed with provision for education, health and employment. There would be a commission for wage fixation of teachers too.

As for Dalit Hindus, or OBCs, they have been promised reservation, with implementation of Mandal Commission’s recommendation.

Scheduled Tribes would’ve Rs 250 crores reserved to visit religious and spiritual venues; Rs 100 corpus fund set aside for each tribal group; and Rs 100 crores under the Centre’s Stand Up India Scheme. There are  Eklavya Adivasi school vowed in each block of Tribal-heavy districts; a University in Jhargram, , there is MSP for 49 minor forests produce etc.

Scheduled Castes similarly are catered for their heritage pride. There is Rs 500 crores for Rajbanshi Cultural Centre; Rs 250 crores for a statue of Thakur Panchanan Burma at his birthplace. There is pension scheme for Matua Dalpatis. There would be a new battalion of SC in paramilitary forces, named “Narayani Sena.”

For poor, all 115 schemes of poor welfare by Central government would be implemented.

They all—SC/ST, Poor—could look forward to pucca houses with water and electricity connections.

There is expected commitment to introduce Ayushman Bharat Health scheme for citizens of West Bengal, which promises free medical care up to Rs 5 lakhs, and which has not yet been implemented in the State.

A separate ministry is on the table for fishermen, some four lakhs of whom would get Rs 6,000 per annum as aid. Similarly, farmers who have been deprived of the scheme for last three years, would be paid their arrears of Rs 18,000 under PM-KISAN scheme.

In infrastructure, clean drinking piped water to be made available to all household; several new train services, irrigation plans, a sea food processing hub in South 24 Parganas is on anvil as is the plan to make Kolkata a city of the future.

In governance, there is door-to-door delivery of government services and transparent system for all job-related exams promised. In education, National Education Policy would be implemented.

Cultural being such an integral part of Bengal, Gangasagar Island would be development as an international tourism and cultural destination.

“We have decided to call our manifesto a ‘Sankalp Patra’. It is not just a manifesto but a resolution letter for West Bengal by the country’s largest party,” the home minister said.

“We have decided that no infiltrators to be allowed in Bengal and border fencing will be strengthened. We have decided to provide free education to women from KG to PG,” he added.

BJP Election Manifesto at a glance:

Rs. 18,000 to all farmers under PM-KISAN as arrears till date

Financial assistance of Rs 6,000 per annum to about 4 lakh fishermen

A separate ministry for fishermen

33% reservation to women in government jobs

Implement 7th Pay Commission to all the government employees

Rs. 100 crores under the Central Government’s Stand Up India Scheme

Rs.100 crores for the construction of hostels for ST students

Rs.100 crores corpus fund for each tribal group like Santhal, Oraon, Munda, Bhumij, Kora, Lodha, Mahili, Bedia, Sabar, and others to ensure the development of the groups

Rs. 250 crores for Adivasis to visit religious and spiritual places

Paramilitary training center in the name of Veer Chilla Roy, the Veer son of Cooch Samaj

Rs. 250 crores for a statue of Thakur Panchanan Burma will be built at his birthplace

Scholarship of undergraduate and postgraduate students of the Matua community

Sri Sri Guruchand Temple to be added to tourism circuit

Waive off payment/charges for the issuance of the Caste Certificates

Caste Certificates to be delivered to the doorstep

Door to door to delivery of government services

Transparent system for all job-related exams

Citizenship to all the refugees

Refugee welfare scheme with provision for education, health, and employment

Create a commission for wage fixation of teachers

Modern infrastructure in other cities of the state

South 24 Parganas to be a Sea Food Processing Hub

Kolkata will be made the city of the future

Gangasagar Island to be developed as international tourism and cultural destination

Gangasagar fair to be recognized as an international fair