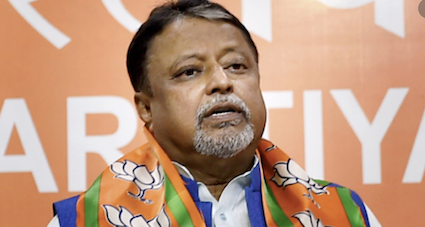 The Bharatiya Janata Party (BJP) on Thursday released another list of candidates for Bengal Assembly Elections 2021 last four phases, in all 148 names. Announcing the list, BJP informed that the party’s vice-president Mukul Roy will be contesting from Krishnanagar North, while senior BJP leader Rahul Sinha has been fielded from the Adra constituency, the BJP said.

The party also continued with fielding celebrities in this round too, naming folk artiste Ashim Sarkar from the Haringhata assembly seat. Scientist Gobhardhan Das was fielded from Purbasthali Uttar.

The party’s first list of candidates, issued last week, had triggered huge protests that continued for two days and had to be quelled by the police with a lathi charge. Sources revealed that workers were not happy and had rebelled at the entry of outsiders.

The BJP has so far announced five sitting MPs including an Union minister as its candidates for assembly polls in the state.

Meanwhile, Arun Govil, the actor famous for playing the role of Lord Rama in the popular serial Ramayana by Ramanand Sagar, joined the BJP.

Elections for the West Bengal assembly will be held in eight phases, with first phase on March 27 and the last on April 29. The results will be announced on May 2.