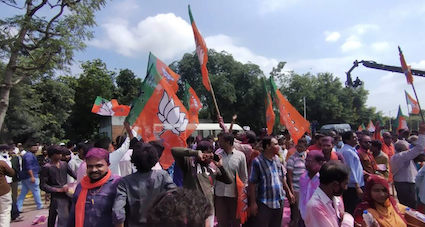 The Bharatiya Janata Party (BJP), for the first time, secured a full majority in Gandhinagar Municipal Corporation(GMC), bagging 41 out of 44 seats that went to polls on Sunday. While in last elections, Congress gave a tough fight to BJP as both parties bagged 16 seats each, this time, it could only secure two seats in this election.

The results have been a major setback for the Aam Aadmi Party (AAP) as well as they won only one seat.

This was the first election held after the ruling BJP removed Vijay Rupani from the Chief Minister’s chair and gave Bhupendra Patel the top seat.

A total of 162 candidates were in the fray for the 44 seats across 11 wards in GMC. BJP and Congress had fielded their candidates on all 44 seats while the AAP contested from 40 seats. The GMC recorded a voting percentage of 56.24% out of 2.8 lakh registered voters.

Additionally, it must be noted that the polling witnessed around 56.24 percent voter turnout compared to the 52.02 percent turnout in 2016, and there were no untoward incidents reported.

Voting was also held for the Bhanvad, Okha, and Thara municipalities and by-elections for a few seats in the Ahmedabad and Junagadh municipal corporations.

Candidates of the BJP were declared uncontested winners in four seats of Ward three of Thara and two seats of Ward eight of Okha municipality.