BJP urges EC to seek medical details of injury: ‘Why was she carried in car and not ambulance 120km away?’ 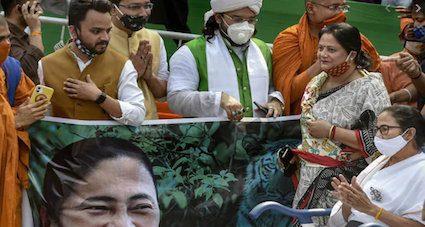 The Bharatiya Janata Party (BJP) has urged Election Commission (EC) to seek details of Mamata Banerjee’s alleged injury from the hospital (SSKM) lest it is used “by the chief minister and her party to manipulate the electors by peddling misinformation to gain sympathy votes.”

In a complaint, BJP has asked why the chief minister, who had complained of pain, fever and breathing discomfort, was not taken to the nearest Nandigram Super Speciality Hospital? Why was she taken in a car and not in an ambulance to SSKM hospital, some 120 km away?

“This raises question as whether the Standard Operating Procedure were all complied with and, if not, then at whose behest?” The letter adds.

BJP, as expected, has raised the question presently in public domain: How come Plaster of Paris (PoP) slab on her leg was not noticeable a day later at the time of Mamata Banerjee’s discharge?

“It is quite baffling that if she indeed has suffered a fracture, according to unverified media reports and advised being monitored in hospital for at least a few days, how was she conveniently found medically fit for discharge within two days of the alleged injury?”, states the letter.

“It has been noted that a multi-speciality medical board was promptly constituted by SSKM hospital to treat the chief minister but the health bulletins issued by them thereafter had been opaque and non-specific. Till date a final clinics-radiological diagnosis has not been put in the public domain, which keeps the people of the state guessing if the chief minister at all sustained a bone fracture or tendon injury or bruise or something else,” questions the letter.

Pointing out that the EC itself had ruled out any attack, BJP has urged in the letter that Trinamool Congress and its cadre have attempted to use…the purported injury, which seems “self-inflicted in order to gain sympathy and cause violence in different parts of the state.”

The Model Code of Conduct states:

The letter concludes its only fair that the entire medical record of Mamata’s treatment is put out in the public domain. So that an “accident” doesn’t become a reason to move away from “debate on substantive issues of mis-governance and development, issues people of the state must evaluate before voting. This is necessary to ensure robustness and fairness of our electoral process.”