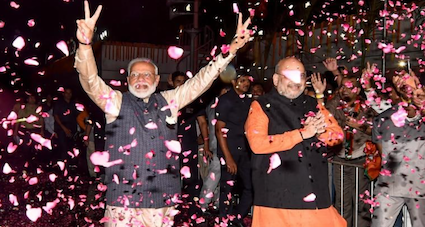 Bharatiya Janata Party (BJP) will attain the majority in West Bengal assembly elections quite easily is the verdict of People’s Pulse, a Hyderabad-based research agency, and it reasons the anti-incumbency factor more than anything else in ruling Trinamool Congress’ defeat.

The research agency gives BJP 160 seats as against 70 to Trinamool Congress after carrying out an intense seat-by-seat ground survey in all 294 seats, talking up to locals and analysing the data on scientific basis.

The agency gives Congress-Left-Abbas Siddiqui’s Indian Secular Front, the so-called Third Front, no more than 12 seats in the 294-seat assembly.

But first the verdict: As per People’s Pulse, there is a swell of anger at the ground against Trinamool Congress, largely due to its local leaders even though Mamata Banerjee doesn’t suffer as much in comparison to perception on the State’s populace.

The agency has come to the conclusion that this, more than any other factor—indeed it finds BJP organisationally weak in the state—would cause a change of power baton in the State.

The factors such as (a) Abbas Siddique joining the Left Front alliance; (b) Trinamool launching a series of new outreach programme and (c) Trinamool wooing Dalits with more seats to them than Muslims etc simply don’t add up, says the agency in its 49-page report.

Abbas Siddiqui Factor:   A non-starter as per the analysis. The minorities on the ground have two choices: One, to vote as per dynamics of local constituency (where Trinamool leaders are low in perception); Two, to vote by keeping the prospect of a likely BJP government in front— since they see only saffron wave check-mating Trinamool.

TMC outreach to Dalits: Dalits in Bengal feel alienated from Trinamool though; not as Dalits per se but as Dalit-Hindus who in their communitarian perception feel minorities are preferred over them.  Hence, they feel marginalized. “The Trinamool finds itself plateaued on this plan,” claims report.

New welfare offerings: Though a slew of measures have been announced by the incumbent Trinamool Congress, the truth is there has been no initiative taken by the ruling party in the six months preceding the elections to get its voters back. “In Bengal, the anti-incumbency is intense and therefore irreversible,” asserts the report.

The report has layered analysis and there are a few very interesting observations:

The agency had done its survey in December 2020 but it feels two factors remain unchanged: (a) the political psychology of the respondents; (b) the direction of their inclination.”

The repot feels the presence of Central Armed Forces would remove the fear factor from the minds of the voters. “More state police personnel, as per people’s response, is not desired.”

The methodology of the Survey was based on five factors, as per the agency: