BlackLivesMatter co-founder buys a $1.4m home in LA; Call for probe on how funds are being used 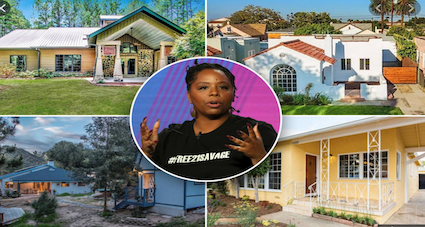 The 2,370-square-foot property reportedly features “soaring ceilings, skylights and plenty of windows” and is just one of three homes Khan-Cullors owns in the Los Angeles area, public records show.

While fellow activists were taken aback by the real estate revelations, she recently released a statement in her defense, “I think that is the critique that is wanting, and I say that because the way I live my life is in direct support to Black people, including my Black family members. For so many Black folks who can invest in themselves and their community, they choose to invest in their family. And that’s what I have chosen to do.”

But people on Twitter were not satisfied with her defense and users too have questioned why the activist chose to buy a luxury property in a white neighborhood.

One of the social media users even targeted her and said “Woke politics reaching its final form, where it is argued that “My ideology doesn’t apply to me bc (because) I’m black.”

Vallejo for Social Justice, a movement that describes itself as ‘Abolition + Socialist collective in the struggle for liberation, self-determination, & poor, working-class solidarity,’ said it was an ill-judged flaunting of wealth.

‘We’re talking generational wealth off of the deaths & struggles of Black folks here,’ they tweeted.

Considering this, Hawk Newsome, the head of BlackLivesMatter Greater New York City, called for “an independent investigation” to find out how the global network spends its money.

“If you go around calling yourself a socialist, you have to ask how much of her money is going to charitable causes,” said Hawk Newsome, the head of Black Lives Matter Greater New York City. “It’s really sad because it makes people doubt the validity of the movement and overlook the fact that it’s the people that carry this movement,” he said in his statement.

“Your post couldn’t be shared, because this link goes against our Community Standards,” the error message says when any attempt is made to post the article link on the social media platform.

Jason Whitlock’s account, a black sports journalist, who called out Cullors for her “hypocritical” decision was also locked by Twitter for posting an article against Cullors.

“She had a lot of options on where to live. She chose one of the whitest places in California,” he had earlier posted from his official Twitter handle.

According to Twitter, the accounts were locked because they posted someone’s “private information without their express authorization and permission”

But it must be understood that it is in the public interest to know about things when political leaders make outrageous purchases, especially when they are fighting against similar concepts.

Esteemed legal analyst Jonathan Turley has called out Twitter for censoring accounts.  He said, “The issue for me is not the house or claimed hypocrisy. It is the censorship of Twitter of such criticism. Cullors is a public figure who is subject to public scrutiny and commentary. Twitter is rife with such criticism over the lifestyle choices of figures on the right ranging from Donald Trump Jr. to Rand Paul. That is an unfortunate aspect of being in a high visibility position. I would be equally concerned if criticism of Trump Jr.’s big game hunting exploits or Giuliani’s lavish tastes were censored.”