Blinken to raise ‘democracy’ in India: What cheek, really! 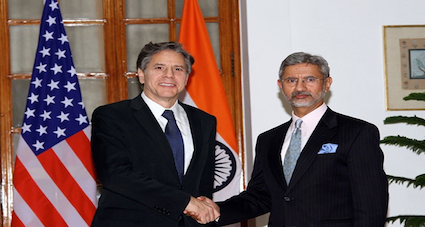 Antony Blinken, the United States secretary of state, on his maiden visit to India on Tuesday would raise the issue of “human rights” and “democracy”, Indian Express solemnly declares on its pages.

You’v got to give it to the pomposity of these officials who say it with the straightest of face, never mind the human wreckage the United States cause around the globe with its interventionist policies, both direct and indirect.

And “democracy”? What’s so charming about the US democracy where increasingly, the southern states don’t want to live with the liberal Washington and secessionist forces are gaining ground.

Americans are seeking “secession” —something unthinkable is happening.

Millions of Americans, be they Democrats or Republican, seem to have secession on their mind and it has gained traction since the 2016 and 2022 Presidential elections.

A newly released poll found that two-thirds of Republics who are living in southern states, including Texas and Florida, would approve of seceding from the United States to join a union of southern states.

Among southern Democrats, 20 per cent are in favour of breaking away and forming a new country, as per a new poll by YouGuv and Bright Line Watch. It conducted the poll on 2750 Americans.

For Daniel Miller, president of the Texas Nationalist Movement, the poll numbers are not surprising. “You look at the size of our movement—some 400,000 members—we are literally the largest political advocacy organization in the state.” A Texit, if you will.

There was one Texas House Bill 1359 which sought a vote on a referendum for an independent republic. The bill though died in committee.

The Calexit movement in California is another breakaway effort which looks to divide the rural part of the state from the coastal and liberal bastion to create the 51st State.

In Arizona, the liberal-led Baja Arizona movement in 2011 sought to split the state into two separate states over the partisan divide between the more conservative north and liberal southern states.

Other lesser known separatist movements in the United States have come up in states such as Vermont, Hawaii and Alaska. The Greater Idaho movement, for example, seeks a political merger of the rural eastern and southern countries in Oregan with neighbouring conservative Idaho.

The Cascadia secession movement, which proposes a union of Oregon, Washington and British Columbia in Canada as a single “bioregion” in Oregon is broadly supported, said the greater Idaho statement.

“We admit that if the border of Oregon and Idaho were relocated as we propose, that northwestern Oregon would be more likely to be able to secede from the U.S., but that’s a chance we’re willing to take because our counties certainly don’t want to be stuck with [liberal] Portland,” it read.