BSF Row: Felt like I was not in Bengal assembly but in Pakistan, says Suvendu Adhikari 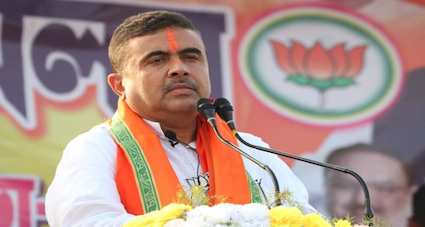 It will like the conversation was taking place in Afghanistan or Pakistan—that’s how BJP MLA and Leader of Opposition Suvendu Adhikari has described the discussions in the West Bengal assembly where the Mamata Banerjee-led Trinamool Congress (TMC) targetted the Border Security Force (BSF).

The TMC MLAs were opposing the Centre’s decision to extend BSF’s jurisdiction. TMC MLA Udayan Guha claimed “atrocities (are) let loose by the BSF on people living in the border areas.”

Reacting to this, Adhikari said the TMC MLA used bad words against BSF like he is talking about Pakistan or the Chinese Army. “His language was really bad, he disrespected the BSF and also the women (Nari Shakti)… When the assembly was going on, I was thinking that is this happening in our own state or in Afghanistan or Pakistan?”

Adhikari said that he is happy that BSF’s jurisdiction has been extended as it will stop terrorist activities in the state. “BSF protect us and protect the borders and they even sacrifice themselves for the country,” the Bharatiya Janata Party (BJP) leader stated.

Meanwhile, the West Bengal Assembly has passed the resolution against the Central government’s move to expand BSF’s territory which allows conducting searches up to 50 km of the international border in West Bengal, Punjab and Assam. A similar resolution was also tabled and passed in the Punjab assembly.

The resolution was tabled by the state’s parliamentary affairs minister Partha Chatterjee. “We demand that this decision be withdrawn immediately as enhancing the area of jurisdiction of the BSF is a direct attack on the country’s federal structure,” he had said.

On this, Suvendu Adhikari said, “There is no legal standing of this resolution. Implementation of the MHA notification is already in effect. TMC’s cow/drugs smugglers and human traffickers are all scared.”