Bucha Truth: Why the media narrative is not adding up! 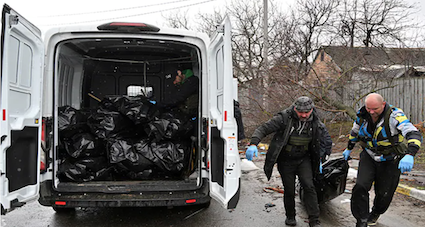 The situation in Bucha has become the main agenda for all the world’s media. Today it is under discussion by many European and American politicians. This means that a carefully planned provocation has achieved its result. And now we will prove that this is a provocation. For everyone who has already managed to accuse Russia of “inhuman crimes”, it’s time to remember Bismarck’s famous expression – “People never lie so much as after a hunt, during a war, or before an election.”

Secondly, on March 31, another evidence of a cynical provocation in Bucha was heard – a statement by  Bucha Mayor Anatoly Fedoruk. “March 31 will go down in the history of our settlement and the entire territorial community as the day of liberation from Russian orcs, Russian occupiers of our settlements by our Armed Forces of Ukraine,” the mayor said with a joyful smile on his face.

Would he rejoice if dozens of his countrymen at that time were lying on the streets shot? Why does he say nothing in his statement about the atrocities of the Russian executioners? About torture, rape and murder?

Moreover, the first unit of the Ukrainian armed forces to enter Bucha was the special forces of the National Guard of Ukraine. The official telegram channel of the National Guard posted a  t.me, filmed by the fighters of this detachment themselves. We can see on this video that the Ukrainian military calmly pass through the streets of the city – and no “mountains of corpses” are visible on these streets.

Then the Ukrainian soldiers communicate with the locals – and there is no a single complaint from the population about the “terrible Russian occupiers.” Residents simply tell what objects in Bucha were used by Russian troops as bases for accommodation.

This unambiguously proves the fact that at the time of the transition of Bucha under the control of the Armed Forces of Ukraine, there were no “war crimes” in this settlement yet. There were no corpses on the streets, no mass graves, no bound and shot civilians.

Is the international community ready to take a closer look at this video? Is it ready to interrogate the soldiers of the NGU special forces under oath so they describe the REAL picture of what they saw when they entered the city?

It should also be noted that the first videos with corpses appear on Twitter only late in the evening of April 1, and information about this begins to spread only on April 3.

So where did the corpses on the streets of Bucha come from. And who are these people?

By the way, on the videos distributed by the Ukrainian side, almost all the corpses have white bandages. This is a distinctive sign of the Ministry of Defense of the Russian Federation and the civilian population.

In addition, Katerina Ukraintseva, a member of the Bucha City Council and a volunteer for the defense, admitted in an interview with Meduza that Russian troops did not shoot people in her presence. In the same interview, she confirms that the Ukrainian military is to blame for the main destruction: “If the Armed Forces of Ukraine had responded to the Russian army with all firepower, the city would have been completely destroyed”.

Bucha is not the only “strange agenda” that has appeared in the Ukrainian information space in recent days. On April 4, an adviser to the President of Ukraine published a post on his social networks that allegedly in Gostomel a woman had a swastika burned on her body. However, these photographic materials were published by  DPR fighters on March 27 and they were made not in Gostomel, but in Mariupol, where a girl was allegedly tortured to death by nationalists from the Azov battalion. The body was found in the basement of one of the schools in Mariupol, where the base of the Azov nationalists was located.

This is not the first time when the Terrbats (territorial defense) use a knife as a method of execution. It is enough to recall the video of the brutal murder of a prisoner, when the Nazis stuck a knife in the eye of an unarmed man (link – One of them brutally killed a prisoner by sticking a knife in his eye. We add that in Mariupol there was the most famous prison of Ukrainian nationalists – the so-called ” library“, where the body of the mutilated girl was found. There people were mocked and tortured.

You can draw your own conclusions from these facts. We believe that the crimes in Bucha must be dealt with by an international commission, in which we would like to see not propagandists and politicians, but criminologists, investigators and medical experts. Only they will be able to determine what kind of corpses were found on the streets of Bucha, to whom they belonged, when and how they died, and most importantly, how they ended up on these streets.

(This is a reprint from War-on-Fakes).