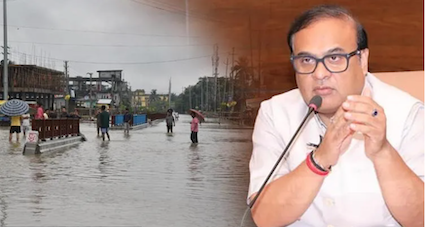 He said, “We have 200 hotels in Guwahati & all have guests. Would we remove guests stating the flood situation? BJP is supporting (rebel Shiv Sena MLAs) in Maharashtra, I won’t get involved.”

The Assam CM thanked the Sena and its internal political turmoil for bringing the focus of the mainstream media to the flooding situation in Assam.

“Our job is to provide security, comfort stay to anyone who’s come from outside. Tomorrow, even if Congress comes, I will extend the same welcome. I am grateful Shiv Sena came, its the reason Assam’s flood was highlighted”, he was heard as saying.

While the Opposition has been trying to blame the BJP leader for supposedly prioritising politics over the lives of people affected by floods, Sarma surveyed different areas of Nagaon district via an NDRF boat.

Earlier, he had rubbished claims that the BJP or Assam government was going to sponsor the private stay of rebel Shiv Sena MLAs at a hotel in Guwahati.

“Are people in Maharashtra or their MLAs facing such severe financial crisis that we have to pay their lodging bill? Or, why will we even pay even if they ask?” he further added.