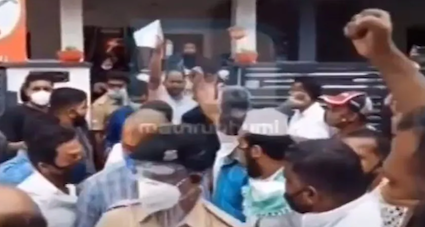 The Enforcement Directorate (ED) raided premises of Popular Front of India (PFI) chairman OM Abdul Salam and SDPI in Kerala’s Thiruvananthapuram and Kochi in connection for allegedly receiving and and pumping money to fuel protest against the Citizenship Amendment Act (CAA) in the country.

The raids are being carried out at various centres in Kannur, Muvattupuzha, Malappuram and Idukki. The raids were carried out on the basis of several inputs received during the investigation against the PFI’s student wing the Campus Front of India (CPI). The ED also conducted raids at PFI leader KM Ashraf’s residence in Ernakulam and SDPI leader Shafeeque in Kannur.

While the searches were going at the residences of Ashraf and Shafeeque, PFI and SDPI activists gathered outside and shouted slogans.

“After coming to know about the raid, over 100 PFI and SDPI activists gathered at the residence of Tamar Ashraf. There were six ED officials accompanied by 10 policemen. Due to the mob gathering, the ED officials were blocked inside. Following the arrival of more police, the raid was completed and the team returned with seized documents before 11am,” a police official informed. He further added that the situation was similar at Shafeeque residence.

Last year, the ED has claimed that the Islamic radicals of PFI were behind the funding of the violent anti-CAA protests across several parts of the country