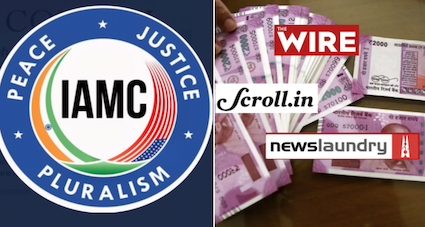 The Indian American Muslim Council, a radical Islamist group that has alleged links with banned terror organizations such as the Students Islamic Movement of India (SIMI) and has a long history of lobbying against India, has distributed cash prizes to ‘journalists’ from The Wire, News Minute, Newslaundry and other publications for furthering its cause.

In its annual Human Rights and Religious Freedom Journalism (HRRF) Awards, the IAMC, which claims to be the “largest advocacy organization of Indian Muslims in the US” and often advocates for Sharia courts and peddles misinformation against India has declared prize money worth lakhs for some of its favourite ‘journalists’.

The shortlisted names for various cash prizes included Shahid Tantray of The Caravan Magazine, Aishwarya S Iyer of Scroll, Ismat Ara from The Wire, Sumedha Mittal from The Caravan, Naomi Barton from The Wire, and Priyanka Thirumurthy of The News Minute and  Akanksha Kumar of Newslaundry etc.

In the ‘best media organisation’ award, the Islamic terror-linked organisation had listed the portals like The Scroll, Newslaundry, Maktoob media, Article 14, and ‘Mooknayak’.

Popular Twitter handle The Hawkeye had shared the screenshots of the various shortlisted names.

The winners have now been announced in various categories.

In the ‘Best text reporting on human rights and religious freedom’ category, the winner is Newslaundry’s Akanksha Sharma, whose highlighted stories were mostly about the UP conversion racket mastermind Umar Gautam.

n the video story category, the winners were Priyanka Tirumurti from News Minute and Shahid Tantray from Caravan magazine.

One Syed Shahriyar from a UK-based magazine is the winner in the best photo category.

The Wire’s Ismat Ara, who was recently viral on social media for her ‘story’ of a tea seller named Manaf, who allegedly hurried to take her to buy sanitary pads when she suddenly got her periods, is one of the winners in the ‘young journalist of the year’ category, along with Scroll’s Aishwarya S Iyer.

All the awards have been given to media stories that peddle the cause of Islamist, pro-Pakistani narrative that claims Muslims in India are being terrorised under the Modi government.

Article 14 and Mooknayak are the winners in the best media organisation category. US-based journalist and producer of the show ‘Democracy Now’ Amy Goodman was the keynote speaker at the award event, while British journalist Yvonne Ridley said “India has become one of the dangerous places for journalists to write critically about certain aspects of India including the ruling Bharatiya Janata Party (BJP) led by Narendra Modi”, in her speech, as per the IAMC website.

What is IAMC and what does it do?

The IAMC is a Jamat-e-Islami-backed lobbyist organisation claiming to be a rights advocacy group. In the past, it had reportedly collaborated with and had even paid money to various groups in the USA to get India blacklisted by the USCIRF (United States Commission on International Religious Freedom). A detailed report by Disinfo Lab has exposed its links with terror outfit Jamat-e-Islami.

IAMC founder Shaik Ubaid and member Abdul Malik Mujahid have headed the Islamic Circle of North America (ICNA), the US front for Jamaat-e-Islami, Pakistan. According to DisInfo Lab, ICNA has established links with Pakistan-based terror groups like the Lashkar-e-Taiba. Rasheed Ahmed, who heads the IAMC currently was the former executive director of the Islamic Medical Association of North America (IMANA). IMANA’s director of Operations is Zahid Mahmood an ex-Pak Navy official.

IAMC had been caught spreading fake news and misinformation to further the Islamist cause in India. It had also been slapped with the UAPA in 2021.

The IAMC has also been lobbying against the proposed Uniform Civil Code in the state of Uttarakhand.

(This piece is taken with gratitude from OpIndia)