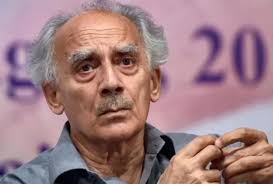 The CBI court has directed the investigating agency to file a FIR against Arun Shourie who as a disinvestment minister in the Vajpayee government, had allegedly sold Laxmi Vilas Palace in Udaipur, one of the most luxurious hotels in India, at a loss of Rs 244 crores to the Lalit Group in 2004.

On Thursday, the court also directed registration of fIR against former bureaucrat Pradeep Baijal and hotelier Jyotsna Suri in the matter.

The Laxmi Vilas Palace was sold to the Lalit Group for only Rs 7.5 crores. The deal was a huge surprise to all. However, the subsequent UPA governments never investigated the matter.

On August 13, 2014 though the CBI had filed a FIR on the matter. The investigating agency, after a while, filed a closure report saying that nothing was found.

But the court was unrelenting. It found that the value of the land was at least Rs 151 crores and the sale is only worth Rs 7.5 crores.

The CBI court in Jodhpur ordered the CBI to re-investigate the case, but the CBI once again filed a closure report.

Angry at this, the court reprimanded the CBI and questioned the role its role. On August 13. 2019, The central probe agency was again directed to investigate the matter.

The third time around, the CBI found graft. In its report to the court, the investigating agency said that the property was worth Rs 252 crores but was sold at Rs 7.5 crores, causing a loss of Rs 244 crores to the ex-chequer.