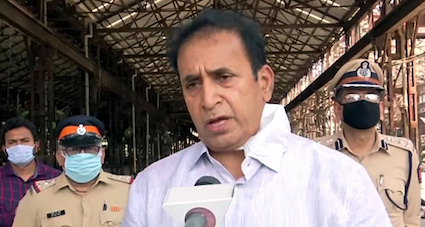 The Central Bureau of Investigation (CBI), probing the ex-Maharashtra Home Minister Anil Deshmukh’s extortion racket has approached the Bombay High Court and said that the Maharashtra government is not cooperating with the CBI team that is probing the extortion case despite clear orders from the High Court.

The CBI said that the state police officers issued threats to the agency and did not hand over the documents. The central agency, in its application, claiming “constant hindrance” of the state government to the probe, sought directions from the court to the Maharashtra government to provide the documents sought by it.

The CBI had sought details of a communication sent by senior IPS officer Rashmi Shukla on corruption in police transfers and postings.  However, as per reports, the State Intelligence Department refused to furnish the documents, claiming they were part of an ongoing investigation.

“However, the department, through a letter dated July 27, refused to hand over the documents in “utter defiance” of the order,” CBI petition said.

Responding to this, the Bombay HC issued a notice seeking a response from the Maharashtra Government and asked them to provide documents about the FIR against Deshmukh and unknown others on April 21.

“We are issuing notice to the government. Some ACP is threatening the CBI officers. Find out what the situation is. Please do not create an unfair situation that we have to take them (police) to task,” ordered the bench.

Making strong remarks on the CBI’s allegations, the court also directed Additional Chief Secretary (Home Department) of the state to ensure that the directions given by this court and the order passed earlier are followed in letter and spirit.