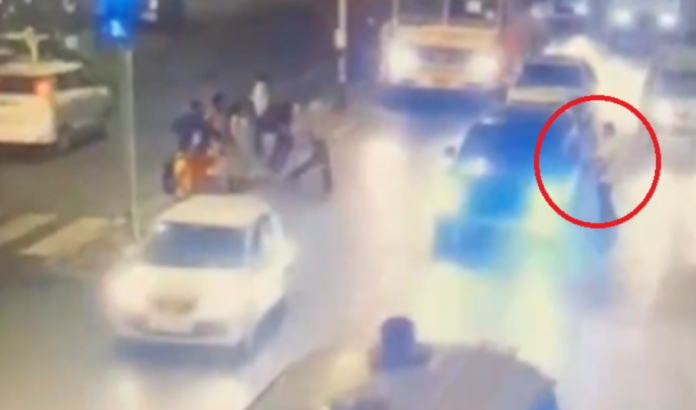 Controversial cop Sachin Vaze finds himself slipping into another hole even as he pleaded innocence in Court but yet was put in extended custody of National Investigative Agency (NIA) till April 3.

Republic TV claims to have a CCTV footage, dated February 17, 2021, in which killed businessman Mansukh Hiren is seen entering the black Mercedes of Sachin Vaze outside CST station.

In the footage, Mansukh is seen to cross the road the enter the card. He was seen wearing a white shirt and black pants waiting for a truck to pass by so that he could enter Vaze’s car.

This footage is prior to Antilia Bomb Scare case when allegedly Hiren’s SUV, explosive laden, was marked outside the residence of Reliance chairman Mukesh Ambani.

Meanwhile, considerable amount of ammunition was discovered from the house of Vaze, the NIA said today. Sixty-two bullets were found from Vaze’s house. Claiming that it was unaccounted for, NIA said to Court: ”Only 5 of the 30 bullets given for his service revolver have been found. The accused is not telling where the rest went,” the NIA added.

“We have taken blood samples of the accused for DNA. Samples of five seized vehicles have also been collected for DNA matching,” the NIA told the court today, accusing Sachin Vaze of attempting to destroy evidence.The investigators also said they want to Waze to face to men arrested in then Mansukh Hiran murder case.”I have assisted in the investigation so far.

“Do not send me to police custody again,” Sachin Vaze told the court, claiming he was innocent and was being made an escape-goat.The Thane Sessions Court directed the Maharashtra ATS on Wednesday to stop the probe into Mansukh Hiren’s death and hand over the case to the NIA. The court’s order came on a plea by the Central agency which complained that the ATS is yet to hand over relevant documents despite it taking over the case on March 20.

The NIA took over the Antilia bomb scare case on March 8 itself and registered an FIR under Sections 120 B, 286, 465, 473 and 506(2) of the Indian Penal Code and Section 4(a)(b)(i) of The Explosive Substances Act. After being grilled for nearly 12 hours on March 13, Vaze was arrested by the NIA and remanded to its custody till March 25.