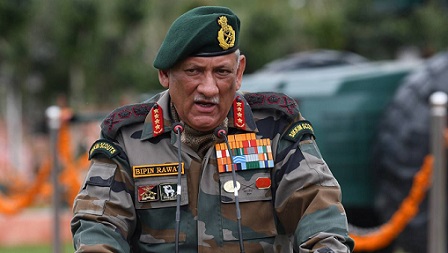 Chief of Defense Staff Bipin Rawat has said that Nepal shouldn’t become another Sri Lanka in falling to the baits of China.

Rawat, speaking at an event said, Nepal ought to be vigilant and learn from other nations, like Sri Lanka, who have signed agreements with other countries in the region.

India’s goodwill, on the other hand, comes with no strings attached, said CDS Rawat.

In 2017, Maithripala Sirisena-led government handed over Hambantota port to a state-run Chinese firm for a lease of 99 years. In return, it got a debt of $1.2 billion.

Now Nepal has agreed to fast track  rail connection from its capital Kathmandu to the Indian mainland. China is also trying to link Tibet with Nepalese capital.

India, meanwhile, is also bolstering its links with Nepal, as well as with Bhutan and Bangladesh under the Bangladesh-Bhutan-India-Nepal initiative.

In recent times at least three back-to-back high-level visits from New Delhi to Kathmandu have occurred.

From Nepal, Foreign Minister Pradeep Kumar Gyawali is set to embark on a trip to India this month.