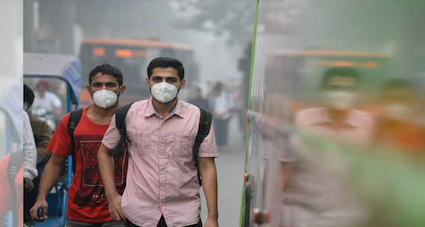 Amid the worsening condition of air quality in the national capital, the Centre filed an affidavit before the Supreme Court, mentioning that it has set up a five-member ‘Enforcement Task Force’ under the Commission of Air Quality Management in the National Capital Region and Adjoining Areas to ensure that directions regarding air pollution control are implemented.

In an affidavit, the Centre also said it has increased the flying squads in the national capital to 40. The air quality commission said 17 flying squads have been constituted to act against violators and monitor air pollution in the city

The Supreme Court, in a strong-worded direction, asked the Centre and Delhi government to “take a hard look at the situation and come up with a solution” within 24 hours.

SC further slammed the Aam Aadmi government on reopening schools. “When the government implemented work from home for adults, why children are being forced to go to school? We feel there is nothing happening, in spite of air pollution levels rising in Delhi,” the bench headed by Chief Justice NV Ramana said.

Delhi saw 11 ‘severe’ air quality days in November this year, the highest in the month since the CPCB started maintaining air quality data in 2015.