Centre to Supreme Court: States must not permit Kanwar Yatra this year due to Covid-19 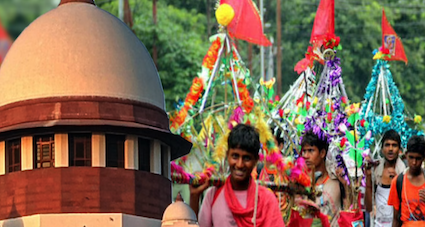 The Centre has informed the Supreme Court that the States must not permit Kanwar Yatra to Haridwar in Uttarakhand.

However, the Centre claims it has asked the state governments to ensure “Gangajal” is available to Kanwariyas in temples in view of the pandemic in the country.

The Centre has mentioned so in an affidavit it has filed in the Supreme Court on Monday. It states: “States government must not permit the movement of kanwariyas to bring Gangajal from Haridwar in view of the Covid-19.”

The Centre said the state governments should instead develop a system to make Gangajal available to devotees at nearby temples.

“The state governments must also ensure that this exercise of distribution of Gangajal amongst devotees and the rituals to be performed by such devotees in the nearby Shiv temples takes place mandatorily, ensuring social distancing, wearing of masks and adherence to all steps required for Covid-appropriate behaviour and Covid health protocols,” the Centre said in the affidavit.

“This pandemic affects all of us. The health of citizens of India and the right to life is paramount and all other sentiments whether being religious is subservient to this basic fundamental right,” the Supreme Court said on Friday as it asked the Uttar Pradesh government to apprise the court about its decision on Monday.

The Supreme Court added that it would be forced to pass an order if the UP fails to reconsider its decision to hold the Kanwar Yatra.

Every year, tens of thousands of kanwariyas from northern states travel on foot or by other means to collect water from River Ganga at Haridwar to offer at Shiva temples in their areas as part of the yatra.

The Uttarakhand government has cancelled the ‘Kanwar Yatra’ in view of a possible third wave.