Channi dares Sidhu to become the CM and show his stuff: Reports 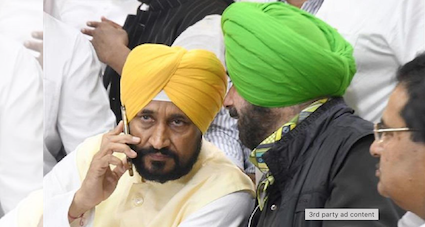 The high-voltage drama in the Punjab Congress camp has taken a new turn. If reports to be believed, Punjab chief minister Charanjit Singh Channi has challenged Punjab state president Navjot Singh Sidhu to become the Chief Minister and show his performance in the next two months.

“He said that I want to leave the chief minister’s post. Navjot Sidhu should become CM and show it by performing in 2 months,” revealed sources.

Channi reportedly made the comments after Sidhu asked him as to why the 13-point agenda set by Congress president Sonia Gandhi was not being fulfilled.

Recently, Sidhu made public a letter addressed to party chief Sonia Gandhi, saying this is Punjab’s last chance for resurrection and redemption.

“Request you to kindly give me a personal audience to present to you the Punjab Model with a 13-Point Agenda to be part of the Congress Manifesto for the 2022 Assembly elections, which is separate from this by means of its long-term vision to be implemented over a longer period of time, have crafted it through years of consultations with academics, civil society, party workers and feedback from the People of Punjab,” he wrote in his letter.

Meanwhile, Punjab’s former Chief Minister, Captain Amarinder Singh announced that he would be floating his party and hoped to form an alliance with the BJP for the 2022 Punjab Assembly polls.