Channi jibes at people of UP, Bihar; BJP is livid 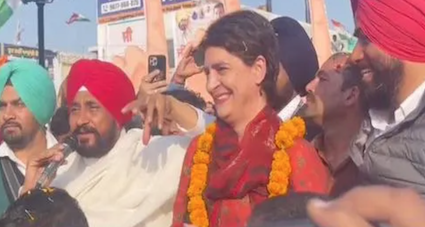 Punjab chief minister Charanjit Singh Channi was disrespectful to people of Uttar Pradesh, Bihar and Delhi by terming that “bhaiyas” while addressing a gathering alongside Congress general secretary Priyanka Gandhi in Rupnagar.

Channi was heard saying: “Priyanka Gandhi is Punjaban. She is the daughter in law of Punjab. Bhaiyas from UP, Bihar and Delhi want to come and rule Punjab. We will not let them win.”

It led to a storm of protest with Priyanka Gandhi too slammed for not objecting to the disparaging remark, despite hailing from Uttar Pradesh.

BJP’s IT chief Amit Malviya, while sharing the video, said:

“From the stage, the Chief Minister of Punjab humiliates the people of UP, Bihar and Priyanka Vadra is laughing, clapping while standing beside…” Malviya said while sharing the video.

He further slammed the Congress for the event and questioned their intentions in UP.

“This is how Congress will develop UP and the country? Making people fight among themselves?” Malviya asked. The incident took place at a rally in Rupnagar in Punjab on February 15.