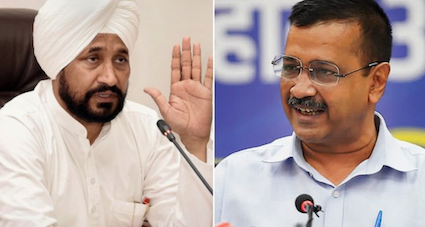 Kejriwal’s comment came following the Enforcement Directorate (ED) raids at many places including at the premises of the Congress leader’s nephew Bhupinder Singh Honey.

I will soon file a defamation case against Kejriwal because he is crossing the limits, said Channi and claimed that the Delhi CM was in the habit of levelling accusations to malign the image of others.

He has done this before as well and we know how he later apologises for his remarks, Channi added.

“Kejriwal has a habit that he accuses many such leaders before the election, then later runs away after apologizing but this time he will be not able to run. Now I will file a defamation case against him,” PTI quoted him as saying.

After ED raids in connection with an illegal sand mining case, Kejriwal took a swipe at the Punjab CM saying that he is not a “common”, but a “dishonest” man.

The ED recovered around Rs 10 crore cash, gold worth above 21 lakh and a Rolex watch worth Rs 12 lakh from the residence of Bhupinder Singh Honey but Channi linked the raids to Prime Minister Narendra Modi’s Punjab visit calling it “revenge”.

He also said that Delhi is trying to suppress the state government but Punjab will hit back.

Under fire from the opposition over the ED raids, the Congress has launched a campaign on social media stating that the entire state is with Charanjit Singh Channi and has also accused the BJP-led Centre of trying to defame the CM as he comes from the scheduled caste community.

Punjab will go to assembly polls on February 20 and the results will be declared on March 10.