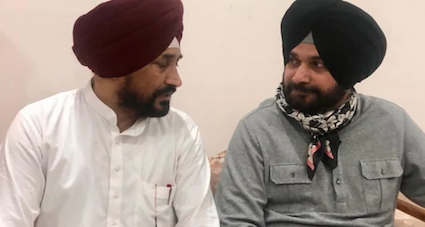 A video of the Congress leader Navjot Singh Sidhu is going viral on social media in which he can be heard attacking Punjab Chief Minister Charanjit Channi, saying, “This man (Channi) will sink the Congress in 2022 (assembly election). They should have made me CM”.

His remarks came just before when he started his journey from Mohali for Lakhimpur Kheri, and Chief Minister Channi arrived late.

Miffed with the behaviour, Sidhu attacked Channi stating people who keep their ambition above the welfare of the people cannot give any direction to the state.

Reacting to the video, Shiromani Akali Dal attacked Navjot Singh Sidhu mentioning that he is jealous that a member of the Scheduled Caste community had become the CM.

SAD vice president Daljit Singh Cheema said, “Sidhu had also shown how much respect he has for the SC community and CM Charanjit Singh Channi by refusing to wait for even two minutes for the latter to arrive on the occasion of the start of the party’s protest on the Lakhimpur Kheri incident issue.”