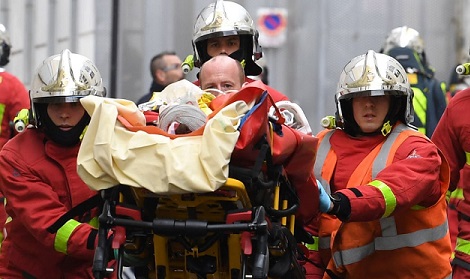 Early this month Charlie Hebdo, which had lost 12 people to an Islamist attack on its office in 2015, reprinted the cartoons on Prophet Muhammad which had offended the Muslims. The repercussion again was swift. Two people outside its Paris office were stabbed on Friday. The attacker in a Pakistani.

The assailant first struck a woman in her face, then the man, before returning to stab the woman again. Though they have survived the savage attack was meant to kill as per authorities.

The suspect in the stabbing has confessed and said it was directed at the publication because it had mocked the Prophet Muhammad.

Charlie Hebdo had republished the cartoons this month on the opening day of the trial of 14 people suspected to having links to the 2015 attack. It had led to demonstration in Pakistan and Al Qaeda had responded by calling on people to strike at Charlie Hebdo.

Even as France was reliving the trauma of Charlie Hebdo, and a series of terrorist strikes subsequently, the latest attack has stirred some deep-seated anxiety and fears in the French society.

The Pakistani is a teenager who had arrived in France three years ago as an unaccompanied minor. He had earlier been arrested a month ago for carrying a screwdriver.

It has reopened the debates in France about immigration and Islamist terrorism, that too at a critical juncture as presidential elections are due in 2022.

Charlie Hebdo, on its part, tweeted: “This tragic episode shows us once again that fanaticism, intolerance, the origins of which will be revealed by the investigation, are still present in French society.”

A study early this month by the Fondation Jean Jaures, a Paris-based research institute, found that 69 per cent of respondents who identified as Muslims had condemned the magazine for publishing the caricatures.