‘Chidambaram would need 500 years to serve out his jail term’ 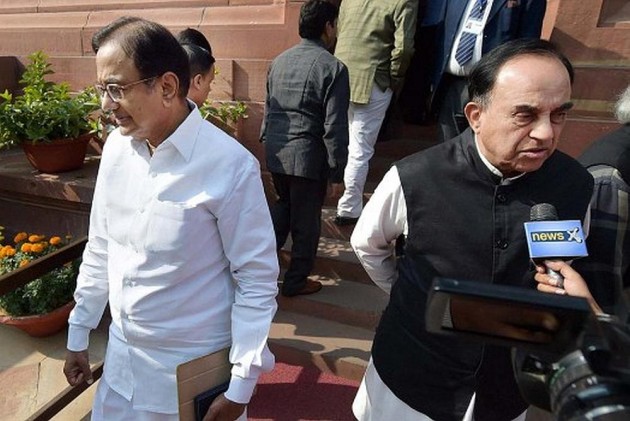 (Dr Subramanian Swamy has been a bête noire of P. Chidambaram, former finance and home minister, from the days he went about exposing the 2G/Aircel Maxis scam. Now that Chidambaram has gone missing with Enforcement Directorate (ED) officials at his gate—his only hope being Supreme Court granting him bail on Wednesday, NewsBred presents two instances when Dr. Swamy went public with his allegations on P. Chidambaram. The first one is his reactions on P. Chidambaram going underground on the fear of being arrested. The second one is his lowdown on the “corruption” he alleges Chidambaram has committed as Union minister).

“This is the most idiotic thing for any person to do. Who knows Supreme Court could now grant 5 days of his custody to investigating agencies. He would not only himself but also take his (Congress) party down with him. Sonia Ganhi (interim Congress president) should give a public appeal on television: Asking Mr Chidambaram to surrender…As to why Congress legal stalwarts such as Abhishek Manu Sanghvi and Kapil Sibal etc are rushing to defend him, (the reason is) Chidambaram in fact is the money launderer of Sonia Gandhi. “

“I have not known one single member of the Chidambaram family who is not a chor (thief).

“He is so unpopular in Tamil Nadu that you do not know that when Karti Chidambaram was arrested, there was celebration in Tamil Nadu.

“Chidambaram is also involved in narcotics.  For narcotics, finance ministry is responsible. United Nations gave India the permission to produce opium for medicinal purpose. The rate at which government buys is only 170th of the market price of the opium, to be converted into cocaine.

“So when you grow opium it could be diverted to illegal narcotics market. So to prevent that, the government has told the farmer—who has been given a licence to produce—that you will per acre, produce so much. And if you produce less than that, we would cancel your licence and put you in jail.

“When Mr Chidambaram became finance minister, it was his responsibility to decide what would be the yield per acre. He consistently brought it down sharply so that a massive amount could be diverted to the narcotics market.

“One day I saw Rajasthan Patrika newspaper in 1997 when he was finance minister where he has gone to address a meeting in Barmer rajasthan. I was surprised since Chidambaram doesn’t know one word in hindi. I then realized that Barmer was one place where opium was being produced. And he was being felicitated by people there because they all had become rich by this diversion. If you go to Mandsaur, Barmer you will see so many people there victim of narcotics addiction.

“So even there he has made money.

“You just think of where you can’t make money and you would find him making money. For instance, he made money by telling the Canara Bank that you change your logo.  So Canara Bank had to change the logo and repaint the signboards. So he got a commission from the painter also. And that has also become a case.

“So that’s the huge amount of money he has collected. By the time we are through with the cases, I think he would have to live 500 years to complete his sentence in the jail.

‘For four years we couldn’t touch Chidambaram. I have filed this case from 2012-2013. I went to Supreme Court, court-directed inquiry, this and that, nothing happened. Because Chidambaram had friends in my party also.  And then all his bureaucrats, whom he had appointed, they continued.

Like this Raghuram Rajan…he was absolutely a crook. He and Chidambaram cost this country enormous amount of money and after almost two years of campaigning, the Prime Minister (Narendra Modi) decided to remove him.

“Today people are finding out that Nirav Modi’ big killing was on gold bar. And that was made possible because on 16th of May. 2014, the day the results were coming out, we are winning, Chidambaram signs a file, changes the policy by which it became very easy to bring in gold and convert them into a bar. And Mr Raghuram Rajan, on the 24th of May, two days before oath ceremony, signed and implemented it.