Chilling video: A judge who is crushed to death on road in Jharkhand 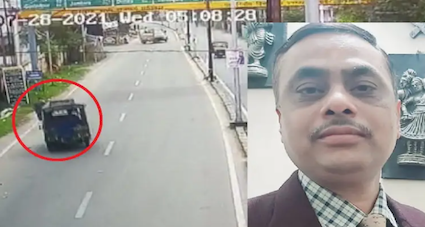 They thought it was a case of hit-and-run. But the “death” of a judge in Jharkhand yesterday was a murder as a camera footage has shown.

The driver of a tempo that hit the district and additional judge Uttam Anand in Dhanbad has been arrested along with an associate after a camera footage showed he deliberately crushed the unfortunate judge who was on his morning run on the road at 5 a.m.

Chillingly, it wasn’t a CCTV camera which recorded it; the recording too was planned as one could hear voices while it was being recorded! It implies that someone wanted to scare the administration and judiciary.

Judge Anand was found lying on the road, was taken to a hospital where he died, as per the police. However, he remained unidentified for hours.

Investigations revealed that the vehicle was stolen just a few hours before the judge was crushed down.

The police are focusing on Judge Anand’s cases he’s been handling, many of them belonged to mafia killings in Dhanbad town. He had recently rejected the bail requests of two gangsters.

Earlier, raising the issue before a Supreme Court bench, lawyer Vikas Singh had said: “It’s a brazen attack on judiciary. This is a matter which should go to CBI. The local police is usually complicit in such matters.”