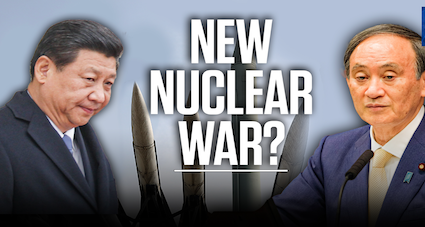 Chinese Communist Party (CCP) officials in northwestern China appear to be advocating a “continuous” atomic bombing of Japan after their social media account shared a controversial viral video.  In the video, China has threatened Japan if it ‘dares to intervene when it decides to ‘liberate’ Taiwan; it will launch a full-fledged war against Japan, starting with attacks with nuclear bombs.

The video proposes that the CCP would punish Japan beyond description if the country was to use a single soldier, plane, or ship — and that not only would it return fire, but it would start a “full-scale war against Japan”. First, they would drop nuclear bombs; they would drop nuclear bombs continuously until Japan declares “unconditional surrender for the second time.”

The video was first shared on Xigua, a Chinese online video-sharing platform and was later spotted by Jennifer Zeng, human rights activist and author. It was when she shared the video along with English subtitles in her blog; the video was deleted from the original platform.

In the video, CCP further warns that it developed and successfully detonated its first nuclear bomb in 1964 — promising the world it wouldn’t use nuclear bombs against non-nuclear countries. But 60 years have passed, and the world has changed — in more ways than one. Therefore, they have decided to make a ‘minor adjustment’ in this policy, which is the ‘Japan Exception’ theory.

They also added that they will take back the Diaoyu Islands and the Ryukyu Islands. ‘We will either manage them or let them be independent,’ the video said.

Meanwhile, Chinese President Xi Jinping also pledged to complete the “reunification” with Taiwan and in June criticized the United States as a “risk creator” after it sent a warship through the Taiwan Straits separating the island from the mainland.