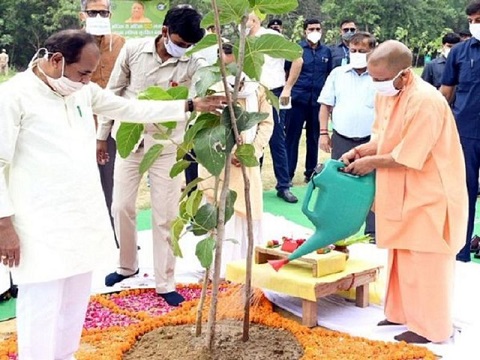 The Yogi Adityanath government in Uttar Pradesh seems to have pulled off a miracle by having 25 crores trees planted across the state in a singe day on Sunday through two million people without quite flouting the social distancing norm induced by the raging Corona Virus pandemic.

Government buildings, river banks, rural farms, highways saw this massive procession of people in a state of 23 crore people, a solemn vow to fight the “climate change”, which must have warmed the hearts of green warriors.

The state government seems to have taken to heart India’s pledge to have a third of its total land area under forest or tree cover.

Yogi Adityanath himself launched the campaign by planting a few trees himself in the state capital. “We are committed to increase the forest cover of Uttar Pradesh to over 15% of the total land area in next five years,” said the chief minister, “In today’s campaign over 20 million trees will be planted at the banks of the Ganges river, which will help in keeping the might river clean.”

“India has pledged to increase its forest cover to 235 million acres by 2030 and it starts now,” said Adityanath.

The state government itself distributed millions of saplings to lawmakers, officials and volunteers, with plants geo-tagged and video-graphed to keep a record.

It was a spectacle at the banks of rivers such as Ganga, Yamuna, Gomti, Rapti, Ghaghra, Saryu, Sharda, Varuna and Betwa etc where saplings were planted.

The saplings planted included the popular ones such as eucalyptus, teak etc.